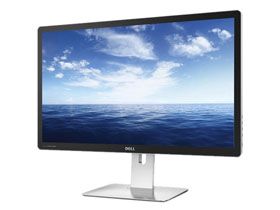 There's no question that regardless of the benchmark results, the UP2715K delivers a gorgeous picture. Even the most sharp-eyed user will be unable to see individual pixels at any viewing distance. When combined with high-quality content, it's hard to imagine things looking any smoother.

Of course with any premium product, especially one that includes a factory calibration, expectations for accuracy are high. The UP2715K delivers on that score but it's not quite as easy as simply plugging it in and turning it on. Even though the included data sheet shows impressive results for the preset Adobe RGB and sRGB modes, we found some flaws that weren't accounted for in Dell's tests. The green primary exhibits behavior that would be classified as unusual if it weren't identical to what we observed in the HP Z27q.

Dell however provides an easy fix for those inconsistencies with included software. After testing every possible calibration avenue, that turned out to be the easiest way to go and it provided by far the best performance. While we feel out-of-box accuracy is lacking, the monitor has the potential to be perfect and unlocking that potential doesn't require too much work.

If you're just looking for a super-saturated pixel-free image however, the UP2715K is more than fine. With its wider-than-Adobe color gamut you'll see deep reds, emerald greens and rich royal blues in pretty much any content. That approach to image fidelity is something we also saw from the Philips 288P6 quantum-dot monitor. It's not necessarily to standard but it does make the screen burst with bold and vivid color. And that is what many users seek after all.

What we'd like to see improved besides out-of-box accuracy is contrast. IPS has become the go-to standard for premium screens but our tests have shown the clear black-level superiority of vertical-alignment (VA) panels. Imagine adding the super-wide color gamut and 218ppi density of this screen to the 3000:1 contrast of a VA monitor. Now that would be something spectacular! Of course so would a desktop OLED panel and Dell has already shown us one so it's safe to say the future of flat panels is looking pretty good.

Since the UP2715K does plenty of things right and can easily be tweaked to perfection, we think it's an ideal choice for professionals who want to pack as many pixels as they can into a 27-inch screen. Dell calls the line Ultra Sharp and this new panel definitely earns that label. For superb performance and a stunning image, we're giving it our Tom's Hardware Editor Approved Award.

Prev Page Viewing Angles, Uniformity, Response And Lag
19 Comments Comment from the forums
Be In the Know