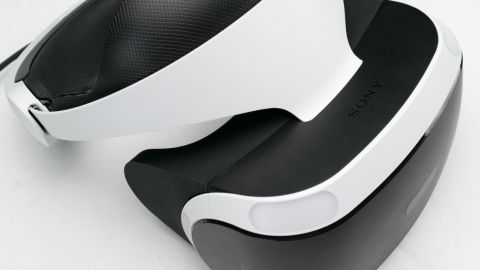 One of the first things you’ll notice about the PSVR is how different it is compared to the Vive and Rift. Both of those HMDs, and even OSVR’s HDK 1 and 2, feature three-point harnesses to balance the HMD's weight on your head. They rely on pressure against your face to keep the headset in place, which can be uncomfortable if you don’t adjust the straps correctly. Sony’s design instead rests the weight of the headset on your forehead.

The PSVR mounting system is more mechanical than the strap other HMDs use. There’s a halo-like ring around the top, which is adjustable for a wide range of head sizes. On the back of the ring, you’ll find a dial that locks it into place and a button to release the lock. When you press the button, you can stretch the ring to fit your head. When you get it into a comfortable position, spin the dial to lock in the right size. The dial also lets you tighten the head clasp slightly for a perfect fit.

Because of the headband mechanism, the PSVR visor doesn't rest on your face. Sony suspends the visor on a rigid mount so it hangs in front of your face. The company also includes a depth adjustment system, which makes the PSVR visor the best we’ve seen for people with glasses. The entire assembly can slide in towards your face and out away from it with the press of a button. The relief adjustment gives you just over an inch of play, so even the thickest glasses should fit without issue. Note that the relief mechanism is not a hinge, though we wish it was. A lot of strain is placed on the adjustment mechanism if you hold the visor while you tweak the headset's angle. This adjustment point may prove to be a weak spot.

The halo headband is padded on the front so that it rests comfortably on your forehead, and it’s padded on the rear where it clamps down on your head. You can’t remove the foam to replace or clean it, but Sony wraps it in a rubberized, moisture-resistant material that you can quickly and easily wipe off.

Unlike most VR HMDs, the PSVR doesn’t rely on a foam gasket to keep light from bleeding in. Because the headset isn't tight against your face, a gasket would be of little use anyway. Sony instead uses a soft rubber flap that conforms to the shape of your glasses, if necessary. And if the rubber is somehow too restrictive, you can easily remove it and still use the headset, although not to the same level of immersion.

There's a hard-wired five-foot-long cable that comes out of the left side of the head strap. Sony reinforces the first 10 inches of the cable with thicker rubber coating that's notched to dictate the direction of flex. The extra reinforcement prevents the cable from getting pinched enough to damage it.

This is the only headset we’ve seen with an inline power button, which is handy. Approximately 18 inches down the cord from the HMD, you’ll find a control box that includes volume up, volume down, mute, and power buttons for the HMD. As a result, you don't have to unplug the headset if you want to switch back to gaming on your TV.

The end of the PSVR’s data cable splits into two plugs: an HDMI connector and a proprietary interface that carries data from the PlayStation to the HMD. Sony also includes 10-foot extension cable so that you can sit on your couch with the headset on. The extension cable isn’t technically necessary, but five feet isn’t a lot of slack to work with. If you sit close enough to your console for the basic cable to reach, you may have a hard time positioning the tracking camera (more on that later).

Speaking of tracking, PSVR uses the same system as the Move and DualShock 4 controllers. Sony uses the PlayStation Camera to track the headset's position and orientation via blue LEDs in nine strategic positions. There are lights in each corner on the front of the HMD and one in the center. You’ll also find a light on the left and right sides, and two more on the back of the headband. In addition to its LED tracking system, the headset features a three-axis gyroscope and a three-axis accelerometer to detect motion.

The Rift and Vive both feature dual 1080x1200 displays (one for each eye), and they operate at 90Hz, requiring 90 FPS or more from the graphics subsystem. Sony designed the PS4 for gaming at 1080p (and lower), and often at 30 FPS. Most people think 1080p isn’t a high enough resolution for VR, so going any lower for PSVR wasn't an option. Sony wants its VR platform to appeal broadly. To achieve this, it had to make the experience as comfortable as possible. So a lower refresh rate wasn't an option either, given all of the research we've seen from Oculus and Valve indicating its impact on comfort.

A 2160x1200 resolution and 90Hz refresh rate are the two main reasons you need a fast graphics card for PC-based VR. The GPU inside Sony's PS4 is powerful, but unless you have a PS4 Pro, it doesn't hold a candle to modern high-end graphics cards. Instead of forcing game developers to target 90 FPS on fairly mainstream hardware, Sony took a different approach.

Its display can operate at 90 or 120Hz, and devs are free to aim for either target. If a game will run at 90 FPS, the display refreshes at 90 Hz. Of course, 1080p at 90Hz is tough for a console, potentially limiting the experiences created for PSVR. Sony gets past this problem by implementing reprojection technology, allowing developers to optimize for 60 FPS. The console then reprojects every other frame, effectively doubling the frame rate to 120 FPS, in which case the PSVR runs at 120Hz.

Sony uses a 960x1080-per-eye resolution for the PSVR’s panels. But the company also takes advantage of its RGB subpixel OLED technology to overcome any perceived image quality disadvantage. Whereas the Rift and Vive require three pixels to create colors, Sony can reproduce any color with every individual pixel, yielding crisper colors than a traditional subpixel display. The Rift and Vive almost seem washed out in comparison.

Sony tapped the same experts who design optics for its SLR cameras to create specialized lenses for the HMD. We’re not sure what kind of lenses the PSVR employs, but we can’t see any visible stepping marks in them, which means they aren’t Fresnel lenses. Even the Rift, with its hybrid-Fresnel lens design, shows visible lines if you look at the lens, not through it. The PSVR’s lenses don’t appear to be fisheyes either. Sony’s implementation is crystal clear throughout.

Prev Page Introduction Next Page What Else Is In The Box?
15 Comments Comment from the forums
Be In the Know