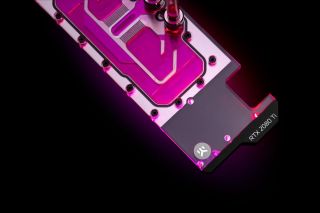 EKWB launched its new EK-Quantum Vector Direct RTX RE Ti D-RGB water block. Unlike is often the case with EKWB products though, it's a little more difficult to tell all about the block from its name alone.

The EK-Quantum Vector Direct RTX RE Ti D-RGB is built to fit reference design RTX 2080 Ti graphics cards and stands out as a water block that's super narrow. EKWB calls it the narrowest block it has built to date, and that's because rather than using the fitting terminal on the side of the block, the G1/4" threading is machined into the face of the block.

Placing the threads there makes the water block narrower but at the expense of some practicality. For example, it won't be as easy to run a very short tube between your CPU and GPU blocks -- tubing will have to come from below. The benefit is that you'll be able to fit the block in ultra-compact cases, where the width would otherwise have been an issue.

Naturally, the block follows the standard EKWB principles of high-flow design. The cold plate is made of copper and plated in nickel to prevent corrosion. It also has the split-flow cold plate, which brings cold fluid in directly above the GPU, spreading it to each side rather than flowing across the GPU. The VRM and memory is also cooled, and it features addressable-RGB.

Pricing for the EK-Quantum Vector Direct RTX RE Ti D-RGB sits at $195.19, though the block is not in stock with EKWB yet.