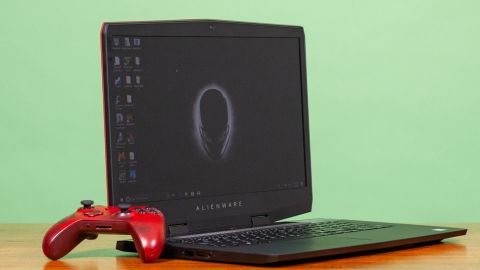 The Alienware m17 is a strong performer with great audio and a lovely display, but it runs hot and very loud.

When a UFO crashes into a sports car, you get the Alienware m17. Call it Iron Man meets Ferrari or Optimus Prime as designed by Apple. Part of what makes this laptop exciting is because I reviewed the m17 in its nebula red color, which really stands out among the lineup which is predominantly gray. If you prefer something a bit more plain, gray is still around as an option.

The m17 borrows a lot from last year’s M15, Alienware’s first thin and light gaming laptop. That means it has rounder, less-aggressive edges than many gaming notebooks, but maintains the spaceship design with an RGB Alienware logo on the lid and a magnesium alloy construction.

The 17.3-inch display is surrounded by an unfortunately thick, plastic bezel that’s distracting. There’s another RGB Alienware logo above the keyboard that also serves as the power button, and the keyboard can be lit up in four customizable lighting zones. The entire deck is covered in a comfortable, soft-touch material.

Even though the m17 doesn’t have the same bump in the back for cooling that previous versions had, it still has ports on three sides. On its left flank are a headphone jack, Ethernet port and a USB 3.0 port. There’s another pair of USB 3.0 ports on the right side. The power jack, Thunderbolt 3 HDMI port, mini DisplayPort and Alienware Graphics Amplifier port are all on the back.

On the Rise of the Tomb Raider benchmark (FHD, very high), the game ran at 52 frames per second, falling below the premium gaming average (62 fps), as well as the Stealth and the Aorus.

On the Hitman benchmark (FHD, highest), the laptop ran at 110 frames per second, beating the 97-fps average and both the Stealth and the Aorus.

The Alienware was in the middle of the pack on Grand Theft Auto V (FHD, very high), at 78 frames per second, beating the average (75 fps) and the Stealth, but was slower than the Aorus (86 fps).

On our Handbrake video editing test, in which laptops transcode a 4K video to 1080p, the m17 completed the task in 9 minutes and 33 seconds, ahead of the average and the Stealth, but behind the Aorus X9.

The 17.3-inch, 4K IPS display on the Alienware m17 is brilliant and colorful. When I watched the open-source movie Tears of Steel at 3840 x 2160, its colors, like purples and greens in a lab and the orange glow of a sunset on a tower were beautiful, and details were crisp and sharp. When I played Battlefield V, I saw a fire bounce off of reflections in dark mud, and I could make out even dark green grass on a devastated brown and gray warzone.

Alienware’s 4K panel is extremely vivid. It covered 195 percent of the sRGB color gamut, easily surpassing the premium gaming average and both the Stealth and the Aorus.

At an average of 310 nits of brightness the m17 is more luminous than the category average (281 nits) and the Aorus, but the MSI’s display was even brighter.

While most of Alienware’s laptops opt for a more classic keyboard, the m17, like the m15 before it, has chiclet keys. The keys offer just 1.1 millimeters of travel and require 70 grams of actuation to press. I usually prefer something deeper, but the low-travel keys didn’t bother me. I hit 100 words per minute on the 10fastfingers.com typing test, with a 2 percent error rate, all of which is pretty standard for me.

The 4.1 x 2.5-inch Windows precision touchpad is smooth and impressively responsive (it’s very much like the one on Alienware parent company Dell’s XPS 13). Mouse movements were accurate and it responded to all of my gestures on the first try.

The speakers on the Alienware m17 are powerful, and do justice to both music and games. When I listened to Lady Gaga and Bradley Cooper’s “Shallow” off A Star is Born (I just saw it on an airplane and it’s stuck in my head. Sue me.), the vocals were clear and the guitars and strings were loud. Only the drums, in some portions of the song, got lost in the track.

When I played Battlefield V, dialogue was loud and clear, and I could hear individual footsteps in the mud and planes droning overhead.

There are a number of audio presets in the Alienware Command Center, but the default setting is pretty good. Changing it to music mode makes it quieter and removes a lot of detail.

While the m17 I opened up was stacked, it’s good to know you can get to some components easily to upgrade them if you need to. To open up the laptop, I used a Phillips head #1 screwdriver to remove six screws and loosen four, and then used a plastic scribe to open it up.

The two SODIMM slots were immediately visible, and the PCIe M.2 SSDs were under an easily removable copper heatsink.

This unit had a 90 WHr battery with no room for an HDD. According to the service manual, m17 laptops with the standard 60 WHr battery have a bay for the hard drive to the left of the battery.

Gaming laptops don’t usually tout amazing battery life, so we weren’t surprised to see the m17 last just 2 hours and 50 minutes on our test, which continuously browses the web, streams videos and runs OpenGL benchmarks at 150 nits of brightness. That’s longer than the Stealth and the Aorus, but still lower than the 3:13 premium gaming average.

No matter what I did with the Alienware m17, it ran loud. The fans worked overtime, even when just sitting at the desktop.

The m17 has an FHD webcam in its top bezel, but it’s only serviceable. Sure, it’s detailed. I could make out hairs on my head, but it was on the dim side. The yellow and blue on my shirt were darker than in real life, and it was hard to make out parts of my face. The lights on our ceiling were totally blown out.

Two pieces of software stand out on the Alienware m17: the Alienware Command Center and Alienware Mobile Connect. The former is the hub for all things gaming; it’s a gaming library, controls the RGB lighting on the laptop and has options for one-click overclocking. The latter lets you connect your phone to your computer for texting and, on Android, mirroring apps.

Of course, there’s a bunch of extra junk that appears on every Windows 10 device, like Netflix, Fitbit Coach, Plex, PicsArt and Phototastic Collage.

Alienware sells the m17 with a 1-year warranty.

The Alienware m17 looks like a hot rod and performs like one. But, for its size, it also kind of sounds like one and has temperatures to match. The screen is bright and vivid and the audio is stellar for a laptop. If you want cooler temperatures or a slightly smaller design, MSI’s GS75 Stealth may be a better option. But, if you want the top of the line in terms of design and performance and can deal with the heat, get the Alienware m17.