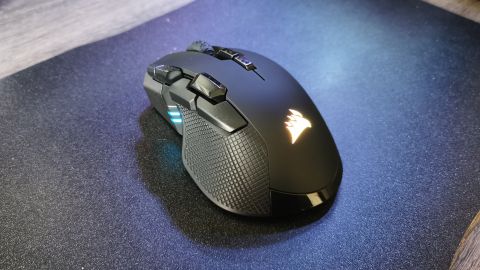 Corsair’s Ironclaw RGB Wireless is the perfect balance between crazy form and intuitive function, and at an impressive price. It’s the perfect palm-gripping mouse.

Although polling on grip style is quite lackluster across the Internet, it’s fairly common knowledge that the most common grip is that of the right-handed palmer. In fact, some estimates say that nearly 50% of all PC users (not just gamers) rely on the tried-and-true method. Corsair’s Ironclaw was crafted specifically for that style of grip, and it really shows. It’s indeed the best gaming mouse for that grip style. Combine that intent with an impressive spec sheet, three modes of connection and some subtle RGB flair, and what you’re left with is an impeccable mouse for all-round gaming, albeit perhaps not the king of the hill when it comes to first-person-shooting (FPS) dominance.

Corsair’s Ironclaw RGB Wireless typically retails at around $75 / £70, which puts it in a bit of an odd position as that kind of price tag technically places it in the ‘premium’ echelon of gaming mice, yet it’s also wireless. However, it's currently on sale for $60 at Amazon as a Black Friday deal.

As most wireless mice are upwards of $100, the Ironclar is relatively affordable in comparison. In fact, it’s actually (outside of two wireless travel mice), the cheapest wireless gaming mouse I can find of any caliber, with the only wireless mouse coming close being Corsair’s Dark Core RGB ($68 /£54 at the time of writing). But enough of pricing, let’s get into the nitty gritty.

As soon as you place your hand on the Ironclaw you can tell it was designed purely for a right-handed palm grip. The shape of it allows your hand to relax directly into the correct position to support that stance. It’s a tall mouse by design, with the top part of it reaching a height of 1.6-inches (40mm) before it slopes off to the rear in a sharp angle, similar in form to the Corsair M65 Pro RGB, but more dramatic. The total length is around 5.5 inches (140mm), with a maximum width of 3 inches (77mm) across from the base. It’s a heavy thing too, coming in at 0.3 pounds (130g) total. I’ve no doubt this is due to the battery sitting inside of it; although, it’s capable of powering wireless play for up to 50 hours on a good day (your mileage will differ depending on use case, lighting and ambient temperature), it does make it somewhat heavy. For those concerned about RSI (repetitive strain injury), it’s definitely something to consider.

The entire top section is a single piece of plastic covered in a soft-touch finish. Glance down to the left side of the mouse, and you’ll find an ergonomically pleasant thumb grip, which is finished in diamond-etched rubber. Follow that up and around the back of the mouse to the top, and the depth of the diamond pattern becomes less pronounced, ensuring there’s minimal friction or irritation near the joint between your thumb and forefinger. It’s a very small detail, but one we appreciate. The right side, where the pinky and ring finger sit, also feels comfortable and natural for your hand, with the bottom segment also finished in that diamond-pattern rubber.

Once your thumb rests in position on the left side in its grip, you have easy access to the two usual back and forth buttons located above it. You can access the most forward button by the tip of your thumb and the back one by the inside of your fingerprint, and there’s a third button between those two. That third button requires you to lift your thumb up in a bit more of a dramatic fashion, but it doesn’t cause any particular problems in regards to comfort. The only drawback to that movement it is that you lose a slight amount of control since the thumb is no longer supporting the side of the mouse, so it’s not a button we’d recommend you bind to something you need during high-intensity movement phases where accuracy is king.

To the side of the primary left click button are two CPI (counts per inch) switches. This makes the Ironclaw a little different from a lot of the competition, as usually CPI switches rest behind the mouse wheel. Honestly, the Ironclaw feels far more intuitive. A quick repositioning of your forefinger to the left,gives you access to the two CPI buttons, allowing you to cycle through three different CPI settings as standard per profile, all of which are configurable in Corsair’s iCUE software (more on that later).

In a bizarre twist, two additional buttons sit behind the scroll wheel, similar to the usual CPI switching buttons found on most mice. You can bind actions to both of these too, but out-of-box they’re used to switch between mouse profiles on the fly, which you can set up in iCUE.

As for RGB, you’ve got the Corsair logo on the back of the mouse, the inside of the mouse wheel and jutting out front underneath the left and right click. Additionally, the three CPI lights that indicate which CPI setting you’re in also support basic static colors; however, you can only change the color for all three, not each individual light.

We have to stress that this mouse is entirely meant for palm-grip aficionados. You can theoretically use it with a claw or fingertip grip, but you’ll be severely limited when it comes to actually reaching the majority of its buttons. We’d go so far as to say it actually supports small-to-medium size hands better than large ones. My handspan is on the small size, measuring 7.5 inches (191mm) wide and 6.5 inches (165mm) long (from the tip of the middle finger to the bottom of the palm).The Ironclaw feels perfect under a grip with those proportions.

As standard, the Ironclaw comes packing the Pixart PMW3391 sensor. Corsair has three main sensors it relies on for the majority of its mice product lines, all of which are optical, the PMW3391, PMW3367 and PMW3360. There’s actually very few mice in Corsair’s product stack that feature the 3391 (the increase in model number denotes higher specced sensors), and these include its more flagship-oriented models, such as the Glaive RGB Pro, M65 RGB Elite and Nightsword RGB.

The 3391 is a custom-tweaked variant of Pixart’s stock PMW3390 and packs some of the highest CPI out there at a maximum of 18,000, and one of the highest inches-per-second ratings at 450 IPS. It’s also capable of withstanding up to 50G of acceleration. So from a specs front, you’re not really going to be let down. That said, there’s not a huge difference between this sensor and the 3360 outside of max IPS and CPI, and it’s certainly not that much of a noticeable improvement in game for the average gamer, unless you lean heavily into a multi-screen gaming environment.

That aside, going for a quick few rounds in 3daimtrainer.com certainly didn’t showcase any particular improvements compared to the M65 Pro I typically use, or the Steelseries Sensei Ten I’ve been using recently.

Action was smooth, and there was little jitter, or latency, even in its 2.4 GHz wireless configuration. That said, maybe it’s because I’m a bit of an amateur, but there was no perceptible increase in my overall performance.

Buying a Corsair mouse means you get access to the impeccable iCUE software suite. Here, you can set your RGB to whatever mode you want, sync all your RGB lighting for your peripherals and Corsair hardware together, assign and record macros to various buttons, mess around with your CPI to your heart’s content and generally mess up a lot of stuff too.

The Ironclaw’s biggest feature is the ability to switch between separate profiles on the fly, much like you would with CPI profiles traditionally. Think of it like this. You create a profile in iCUE for playing World of Warcraft, you set the RGB LEDs to breathe blue (because “For the Alliance!”) and you then calibrate your three CPI profiles specifically for different roles in the game (perhaps you’re a clicker, I won’t judge). You can then create another profile, change the lighting again to give you a good visual cue and adjust two separate CPI profiles for Call of Duty: Modern Warfare 2019, one with a low CPI setting for sniping and another higher CPI setting for general play. You get the picture. You then save all of this onto the mouse itself, meaning you can take it with you anywhere and use it on any PC, even if it doesn’t have iCUE installed.

Then there’s the wireless connectivity. On the whole, during my testing I found it to be just like playing with a wired mouse. Corsair’s Slipstream technology did well to minimize any noticeable latency between the Ironclaw and the PC. Battery life is a nuisance among wireless mice lacking wireless charging, as is the added weight of the battery. But the average gamer will likely be fine plugging in the Ironclaw once or twice a week.

On top of that, it also bakes in Bluetooth connectivity if the 2.4 GHz wireless via dongle isn’t your thing. So if you’re looking for something that can double as a productivity mouse on the move and can hook up to your gaming laptop, tablet or even your phone, you can do that too.

There’s a lot to love about the Corsair Ironclaw. It’s a mouse that surprises you. At first glance, it looks as eccentric as Corsair’s mouse design has become over the last few years, yet, each eccentricity has a purpose. The shape is ergonomically intelligent, the button placement is intuitive and numerous, the materials come together to keep you comfortable and the mouse looking clean, the sensor is precise and to the point and the connectivity modes included are second to none, even for gaming wirelessly. It’s the whole package. The fact that you’re getting all of that, plus good wireless performance and a near 50-hour battery life on a good day for less than most premium wired mice makes us question what it is that pushes premium, cable-free cookie cutters above the $100 mark.

Of course, it’s not perfect. The hardest of the hardcore FPS fraggers willl struggle with the weight, size and maybe even the button placement. Afterall, palm-grip gaming FPS kings are few and far between. And perhaps you’re not interested in having a mouse profile for every game under the sun.

But for the average palm-gripper, the Ironclaw is the perfect balance between price, performance and feature set. Its biggest assets are its button count and how it feels under-hand, even if all you do is plug it in and refuse to install iCUE (although, I recommend you do). That ergonomic comfort, sensor and button load out speaks volumes more than any software ever could.