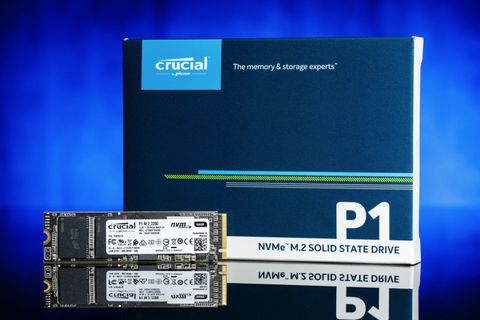 We put the 1TB Crucial P1 against a few very competitive options. Of course, we have the Intel SSD 660p that has the same components and is basically the same drive. We also have the Plextor M9Pe, Samsung 970 EVO, WD Black, Adata XPG Gammix S11, and MyDigitalSSD BPX Pro. These represent most of the mainstream NVMe options available. We also threw in the Crucial MX500, a SATA drive, to gauge the performance of the more expensive NVMe products.

The P1’s first result is rather alarming. The P1's total score of 4970 points and the average bandwidth of just 301MB/s is nearly the same as the best SATA drives. In fact, despite its faster NVMe connection, the P1 barely outperforms the SATA MX500. The P1's NVMe-based competition, however, scores much higher.

Most flash-based drives load the StormBlood benchmark in 21 to 22 seconds. The Crucial P1 scores the lowest total time of 21.97 seconds, but the difference between the fastest and slowest flash-based SSDs is slight. In either case, it's clear that any SSD is much faster at loading games than any HDD.

If you want to transfer a bunch of files of various sizes, the Crucial P1 can handle that without a problem. It isn’t the fastest drive in the test pool, but the 288MB/s average in our copy test is respectable. The Crucial P1 is very similar to the 660p during our read test, reminding us that these drives are built from the same basic building blocks.

The Crucial P1 installed SYSmark in 15 minutes and 32 seconds, outperforming the WD Black and the Intel 660p by nearly a minute. The Crucial MX500, however, was six seconds faster. After the SYSmark run, the Crucial P1 scored 1600 points in the responsiveness test. On its own, that is almost three times faster than an HDD. But the SSD competition is faster, including the SATA-based MX500.

The MyDigitalSSD BPX Pro takes the overall win in this test. Once again, the Crucial P1 is very similar to the Intel 660p, though it does have higher read performance and slightly lower write throughput. We do see the advantage of the NVMe interface in this test, though: The P1's read and write throughput are three to four times faster than the SATA-based MX500.

The Crucial P1 outperforms Intel 660p, but lands in sixth place overall. The P1's slower sequential performance lands a tier below some of the other mainstream competitors.

Crucial’s P1 exhibited strong 4K random performance at a QD (Queue Depth) of 1. The drive is also strong in the all-important QD 1 to 4 range. It also meets its QD32 specification, but this heavy workload is irrelevant for most desktop file transfers.

The Intel 660p is faster than the P1 for the first 20 seconds of this heavy write workload, but after that, the P1 took the lead until the buffer was full. Crucial’s P1 wrote 149GB of data before its write speed degraded from 1.7GB/s down to an average of 106MB/s. Overall, this is an impressive result in a worst-case scenario, but you won't be able to take advantage of the P1's full write speed unless you're transferring files from an equally fast storage device.

The P1 consumed just under 700mW with ASPM disabled, and just barely 11mW after we enabled the feature.

The P1 consumed an average of 2.53W of power during our 50GB file transfer. That's slightly more power than the MX500, but you get almost twice the performance in exchange. The P1 also had the lowest maximum power consumption. The P1's efficiency measurement of 114MB/s per watt is also plenty impressive, but Intel's 660p is slightly better.