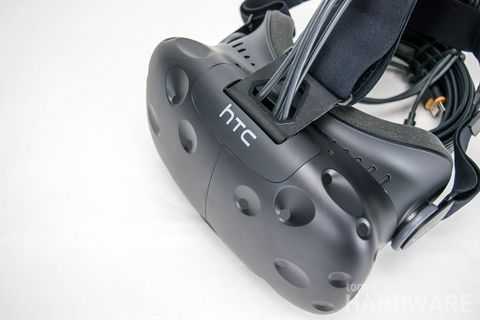 What You Can (And Can't) Do With The Vive

The Vive is launching with a surprisingly diverse line-up of content. Though Valve is a direct partner with HTC, its involvement primarily involved arming developers with everything they needed to build games. Valve did release a free title called The Lab, which is composed of several mini-games and experiences. But the real meat comes from other companies that took Valve's tools and ran with them.

One of the very first experiences that was ever shown on the Vive was Job Simulator: The 2050 Archives. The game took many forms in the last year, and the final release is one of the titles you get with the Vive. The idea is that you are in the future when robots do all of the jobs. The company created a simulator you can use to “remember what it was like to job.” These are goofy little scenes where you can play an embellished version of an office worker, chef, mechanic and grocery store clerk.

Fantastic Contraption is also included with every Vive system. This is a puzzle game that was first released years ago as a 2D title. Northway Games teamed up with Radial Games to convert the original concept to a room-scale VR title so you can build life-size contraptions in the comfort of your own home.

The third piece of content you get with the kit is Google’s Tilt Brush. To me, this is one of the first “killer apps” that people will spend hours in. I’m happy to see it bundled with the hardware, because this is a must-see for everyone; there’s something completely indescribable about drawing in 3D space.

There Are How Many Launch Titles?

The three aforementioned titles are a great start for anyone exploring VR, but you’ll likely want something with a bit more visceral excitement, especially once you get accustomed to actually being in virtual environments, rather than observing them. Fortunately, there’s no shortage of different experiences to try on day one.

Room-scale tracking paired with six degrees of freedom (6DoF) controllers open up a whole new world. Suddenly old genres like gallery shooters present tremendous potential. Space Pirate Trainer VR and Hot Dogs, Horseshoes & Hand Grenades are both great. Hover Junkers is another example of a VR shooter, though not a gallery shooter. In this game, you're actually fighting other players in epic gun battles.

If RPGs are more your style, Vanishing Realms and A Legend Of Luca are games you’ll want to look at. Both have you playing in a first-person perspective, where you are the sword-wielding hero collecting loot and fighting enemies. The Gallery – Episode 1: Call of the Starseed is a puzzle-solving adventure that takes inspiration from the classic Sierra title, Myst. The Gallery features a deep story line with a rich soundtrack. It also features NPC animations that have been created by real actors and a unique motion capture technology from inside VR.

There is a fair selection of more casual titles, as well. On top of the three titles that ship with the Vive, you have Audioshield, a rhythm game that has you blocking beats with shields (it more fun than I could ever describe); Cloudlands: Mini Golf VR, which is exactly what it sounds like; and Final Approach, where you act as the invisible flight control god from above.

All told, there will be 45 room-scale titles launching with the Vive on launch day. That doesn’t include the games that don't support room-scale and the dozen or so games and experiences that are already available before the hardware, including Elite: Dangerous and its offshoot dogfighting game Elite: Dangerous Arena, as well as Descent: Underground, which are also available for 2D screens. There's definitely no shortage of content for the new platform.

In addition to the 40+ VR-ready and -exclusive titles that you can experience today, Valve will let you play any game in your Steam library on your Vive headset. These games won’t play in stereoscopic 3D, but they will be playable on a huge virtual monitor in front of you. Oculus offers this feature for Xbox One games on the Rift.

If you want to play your older titles in VR, you need third-party software to make that happen. Currently, the two enabling solutions are VorpX and Vireio Perception, but neither package supports the Vive at this time.

Can It Do More Than Gaming?

As with any VR platform, developers are still discovering the possibilities of what you can do with the Vive. Right now, though, the system is primarily for entertainment. You can watch 360-degree videos through the Jaunt application, or you can take in passive content such as TheBlu from Wevr. But there’s not a lot in the way of productivity yet.

Virtual Desktop is one option. It lets you access your entire computer in a virtual environment. You can even make your icons float on a transparent background. Game developers and environment designers will soon be able to edit their creations in VR using the upcoming VR editors for Unity and Unreal Engine.

Room-scale VR opens up a lot of doors, but it will take some time before we see much more than gaming.

Will There Be Developer Support?

Prior to the Vive reveal, Valve was talking to a few developers about the prospects of a room-scale VR system, which led to the content that was introduced with the Vive at Mobile World Congress. Very few developers were known to be working on content for the Vive. Nevertheless, HTC and Valve were confident that the system would hit the market that year.

Fast forward to today. We’re a few months behind the original plan, but the content line-up is starting to look a lot better. As recently as January, we knew of fewer than 20 titles for the Vive, and not all of them were planned for launch-day release. Now that the Vive is finally landing in customer hands, you'll find an impressive roster of games in Steam.

We thought 30 titles sounded great for the Rift. But developers have had Rift hardware to work with for nearly three years, so we weren't surprised to see that HMD launch with so many titles. By contrast, Vive dev kits have really only been out there for around six months. Still, the platform somehow ended up with more launch content than Oculus pulled together.

In a recent interview with Polygon, Valve’s Chet Faliszek said there was never a plan to have such a complete line-up on launch day. "We provided the hardware, but it was up to the developer what to make, what platforms to support and when to release it," he said. The 35+ titles that will be available on day one are simply a product of the motivation and passion of the teams behind the games.

In January, during the SteamVR Content Showcase, Faliszek hosted two round table discussions with the 12 developers that were presenting games at the event. During those discussions, he asked, “So have you guys all moved to VR forever?” And the answer was unanimously yes. Once people try VR, and room-scale in particular, the medium's potential is immediately clear. Developers are taking note and jumping in with both feet. "I feel like developers walk out of VR and then they’re like, 'OK, I have 10 ideas that I instantly want to make right now!'," said Alex Schwartz of Owlchemy Labs. "Usually, with new tech you have to really pitch people hard, but in VR it’s the other way around."

There’s very little trepidation from those who have dipped their toes into VR already. The confidence is high, and the opportunities to create something amazing are endless. Everything is new in room-scale VR. “I think it’s worth getting into [VR] early. There’s so many cool things to discover, so many games that haven’t been made, or genres of games that haven’t been made. I think it’s a great time to get in,” said Futuretown’s Justin Liebregts in the same showcase. “This is one of the first times in a long time that 'reset' is being hit on the industry,” added Andy Moore of Radial games. “You can be a brand new person out of the blue and make something amazing. And not have to compete with people that have been established for 20 years.”

That says a lot about the health of this industry in the early days.

In Some Ways Its Easier To Build A VR Game

Some of the folks who feel that room-scale VR is destined to be short-lived often use the argument that development for the platform is too difficult, and developers won’t support it. That isn’t the case if you believe what Faliszek says about the topic. Developers are actually finding many aspects of VR development much easier than traditional games.

For example, you no longer have to make elaborate character animations for the player’s avatar. You also don’t need to map buttons for things like duck or attack. StressLevelZero pointed out in a developer video that the cover system for Hover Junkers didn’t have to be created, and that there is no need for aim assist. It all depends on your own personal accuracy. All of these things help make putting together a game easier in VR.

Current page: What You Can (And Can't) Do With The Vive

Prev Page Health, Safety & Maintenance Next Page How We Tested The HTC Vive
65 Comments Comment from the forums
Be In the Know