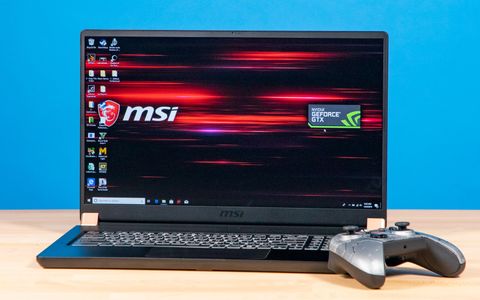 The MSI GS75 Stealth is a sleek 17-inch gaming notebook with a bright screen and strong performance, but its massive touchpad can interfere with typing.

There’s never anything wrong with a bit of class. The MSI GS75 Stealth ($2,099 to start, $2,999 as tested; not available in the UK as of this writing), the company’s 17-inch gaming laptop with an Intel Core i7-8750H and an RTX 2080 Max-Q GPU is about as sleek as a 17-inch gaming laptop comes. And its chassis isn’t the only good-looking part; the display is nice and bright, too.

But the laptop’s large touchpad is awkwardly situated in a way that can interfere with typing, so MSI’s black-and-gold laptop still has some adjustments to make before it can become the gold standard for classy, svelte gaming.

The Stealth line continues to showcase MSI's design chops. There are no red racing stripes or aggressive angles on this laptop; its design is a stately, minimal black and gold. The aluminum lid features MSI’s dragon shield logo in gold, but no other writing or logos. The lid is also surrounded by gold trim.

Thin bezels frame the 17.3-inch display, and gold-colored hinges hold it up. The deck is black aluminum, with a border around the touchpad. Cutouts along the sides reveal some gold accents along the vents. By default, our review unit’s keyboard was flashing gold, also a nice touch, though that’s customizable.

The GS75 Stealth has its fair share of ports on the side for peripherals or additional storage. On the left side lives an Ethernet jack, USB 3.1 (Type-A) port, microSD card slot and two audio jacks. On the right side, you’ll find a USB Type-C port, a Thunderbolt 3 port, two more USB 3.1 ports, HDMI output and a lock slot.

With its Nvidia GeForce RTX 2080 Max-Q, the Stealth can play most games at their highest settings. I played Battlefield V on high settings (with ray tracing set to high) at FHD resolution (1920x1080) on the game’s Tirailleur war story. As I played, the game ran between 58 and 68 frames per second (fps) with occasional screen tearing, and the fans ran very loudly.

On the Shadow of the Tomb Raider benchmark (FHD, highest settings), the laptop earned a score of 68 fps, beating the average (52 fps), as well as the Aero with its GTX 2070 Max-Q. But it couldn't best the Raider with its non-Max-Q RTX 2080.

On Hitman (FHD, ultra), it played the game at 109 fps, beating the 97-fps average and on par with the Raider.

When it came to Grand Theft Auto V (FHD, very high), the Stealth ran the game at 81 fps, beating the average and the Aero but falling behind the Raider.

The Stealth is powered by an Intel Core i7-8750H CPU, 32 GB of DDR4 RAM and a 512 GB PCIe-NVMe SSD. That’s more than enough to power my usual workload of 20 to 30 browser tabs, often with streaming music or video, and could be used for even more strenuous tasks.

The Stealth paired 60,000 names and addresses in 40 seconds on our Excel macro test, coming in just faster than average.

And on our Handbrake test, in which computers transcode a 4K video to FHD, the Stealth took 10 minutes and 48 seconds to finish the task. That’s below average (9:57) but faster than both the Aero and the Raider.

The 17.3-inch, 1920x1080, 144 Hz display on the Stealth is bright, though not as vivid as competitors. When I watched an FHD trailer for Captain Marvel, Carol Danvers’ teal suit failed to pop against a dark cave wall, though it showed up well in brighter scenes. As I played Battlefield V, I noticed the leaves on trees clearly changing from a green to a crisp orange, as well as a fireball blowing up in a red burst over dark brown dirt.

MSI’s panel covers 116 percent of the sRGB color gamut. That’s good but still below the 139 percent average and the astounding numbers put up by the Raider and the Aero. Those are far more vivid.

That said, MSI’s panel is much brighter than competing screens, including both the Raider and the Aero, both at 283 nits. It’s also brighter than the premium gaming average of 281 nits.

I found that the Steelseries keyboard on the Stealth is comfortable. With 2 millimeters of travel and 72 grams of actuation, it’s the right mix of clicky and bouncy. But when I typed, I made massive errors. I reached 88 words per minute (wpm) on the 10fastfingers.com typing test, far slower than my usual 115 (or so) wpm. And my errors shot up from my usual 2 percent to 6 percent.

That’s because the 5.4 x 2.5-inch touchpad is almost comically wide. My right palm rested on it and occasionally made the laptop scroll or click while I typed. This thing needs better palm rejection.

I never found myself using the whole touchpad, but it’s spacious and, more importantly, accurate with Windows precision drivers. No matter what gesture I threw at it, it worked the first time.

The pair of 2-watt speakers are powerful enough to fill a room, but the sound quality isn’t anything to write home about. When I listened to Kendrick Lamar and The Weeknd’s “Pray For Me,” their vocals and synths were clear, but the pumping bass line was subpar. I tried making it more powerful with some tweaking in the included Nahimic audio software but wasn’t particularly successful.

When I played Battlefield V, gunshots rang out clear, though voices were muffled and the background music wasn’t as full as on some other laptops.

To take the bottom of the case off of the Stealth, I had to remove 15 Phillips head screws (I used a Phillips head #1 driver) from the bottom. One was hidden under a factory seal, which will let MSI know if you have opened up your PC. Then, I pulled the bottom, which popped off easily.

The M.2 SSD was immediately accessible, and there was another bay to add another M.2 NVMe-PCIe drive. The rest of the motherboard, however, is covered in a thin paper-like material, which MSI told me is for insulation purposes. The company also said the RAM is not soldered down, but it’s also not immediately accessible with the paper covering the motherboard. I didn’t tear the paper to find out where the memory was.

The Stealth lasted longer than its competitors on a charge. But, like most gaming laptops, you’ll still need to carry your power brick with you. The laptop ran for 3 hours and 40 minutes on our battery test, which continuously browses the web, streams videos and runs OpenGL tests. The average is 3:21, while the Aero lasted 3:34 and the Raider endured for 2:49.

The 720p webcam on the Stealth is more than sufficient for calling friends and family. If you’re streaming, you’ll probably want something with a higher resolution.

When I took a picture with the Stealth’s camera at my desk, it caught fine details, like the hairs in my beard and the stitching on my sweater, and the colors were accurate. But lights from the ceiling and nearby windows were totally blown out.

MSI’s Stealth is plagued by bloatware. Sure, there’s some useful stuff on there: MSI Dragon Center lets you explore CPU and GPU usage and tune your system, while SteelSeries Engine 3 lets you customize the lighting on your keyboard.

MSI sells the GS75 Stealth with a 1-year warranty.

The $2,099 base model bumps the GPU down to an RTX 2060, 16 GB of RAM and a 256 GB SSD. All of the configurations in between use the same processor and 1080p display with a 144Hz refresh rate, but use different combinations of storage and RAM.

MSI’s GS75 Stealth is a gaming notebook with a sleek, adult design, powerful performance and a bright 17-inch display. If you’re looking for a thin, lightweight desktop replacement with an RTX 2080 Max-Q GPU, this is a strong pick.

If you’re looking for raw power, MSI offers its GE75 Raider with a full-sized RTX 2080, though it’s certainly not as portable nor as stylish, making the GS75 Stealth the pick for people who care just as much about appearances as gaming. However, the Raider has a smaller touchpad that didn’t interfere with typing.

If you can get over the touchpad hiccup and use headphones to get better sound, the Stealth is not only a looker, it’s a slim performer, too.