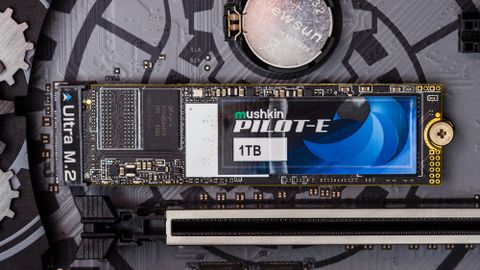 Today, the Pilot-E gets thrown into the ring with some of the top mainstream SSDs out there, as well as a few value options. From Samsung, we’ve included both the 970 PRO and 970 EVO Plus. Both utilize Samsung’s Phoenix NVMe controller, but the PRO features 64L MLC V-NAND while the EVO Plus has 9xL TLC V-NAND. Also included is WD’s Black SN750, boasting an in-house 8 channel NVMe controller and Toshiba BiCS3 64L TLC. Corsair’s Force MP510 represents one of the many Phison E12 based SSDs out and Adata’s XPG SX8200 Pro is the Pilot-E’s direct competitor. Additionally, we threw in Intel’s best value NVMe SSD, the 660p as well as its ridiculously expensive and fast Optane 905P. Finally, we threw in an Adata’s XPG SX6000 Pro and Crucial’s MX500 for comparison sake with lower-end SSD options.

Silicon Motion’s NVMe controllers seem to have some of the fastest 4K read performance. Thanks to this, the Mushkin Pilot-E is able to attain a fast total load time of 19.05 seconds. This lands it 5th place overall and ranks it much faster than most SSDs.

When it comes to copying 50GB of files, Adata’s SX8200 Pro has the upper hand. With an average throughput of 749MBps, the Mushkin Pilot-E is 17% slower. Still, it is significantly faster than the Corsair Force MP510 and the entry-level competitors. Just as well, when reading back our 6.5GB test file, the Pilot-E’s read performance is nearly 200MBps slower than the Adata and ties the Intel Optane 905P. Overall, it ranks 6th on these charts.

With a score of 5,099 points and an average throughput of 678MBps, the Pilot-E scores 6th place overall. Here it outranked the WD Black SN750 with its faster random performance, but the Adata, Corsair, and Samsung’s 970 series all outrank it. Overall, the Pilot-E will provide more than ample performance for your average home and office applications.

Intel’s Optane SSD 905P blows all its competitors out of the water in this test. With its ultra-low latency memory, nothing can touch it. Here, Mushkin’s Pilot-E surpasses the WD Black SN750 in application performance, though this time by just a hair. With a final score of 3.47 points, it will provide adequate performance for workstation use. But the Adata XPG SX8200 Pro, the Corsair Force MP510, and the Samsung drives all prove to be slightly better for the task.

Overall, read and write performance lags behind slightly compared to the test pool’s average, but that doesn’t stop Mushkin’s Pilot-E from hitting speeds of 3.35GBps read and 3.00GBps write in ATTO.

Mushkin’s Pilot-E delivered competitive read and write results when testing it with iometer. Under sequential tests, the SSD averaged about 3.5GBps read and 3GBps write throughput. 4K random response times were quite fast too. But once again, the Adata XPG SX8200 Pro shows that there is still some room for improvement. Averaging the SSD’s queue depth 1-4 performance, we can see that it outranks the WD Black, Intel 660p, and SX6000 Pro, but the SX8200 Pro gets in an additional 1,500 IOPS. As well, under peak load, the SX8200 Pro can deliver almost 100,000 more read IOPS and the Pilot-E.

The Pilot-E’s SLC write cache isn’t as large as Adata’s. While both drives are neck and neck writing over 160GB of data within only a minute, after that, the SX8200 Pro starts to leave the Pilot-E behind. While the Adata maintains over 1GBps write speeds once the cache fills and then 615MBps at its slowest, the Pilot-E degrades to an average of 675MBps and then later just over 400MBps as it folds over SLC data to TLC cells. Overall, this write performance should not leave you disappointed for most day-to-day use.

The Pilot-E sips very little power at idle, just 12mW when ASPM is enabled in our BIOS, similar to other Silicon Motion based SSDs. It wasn’t quite as fast as the Adata XPG SX8200 Pro during our file copy test, but on average it consumes less power, which propels the Pilot-E to second place on our efficiency chart. Unlike the Adata, this Mushkin drive isn’t wasting power trying for the best performance; it's quite balanced.