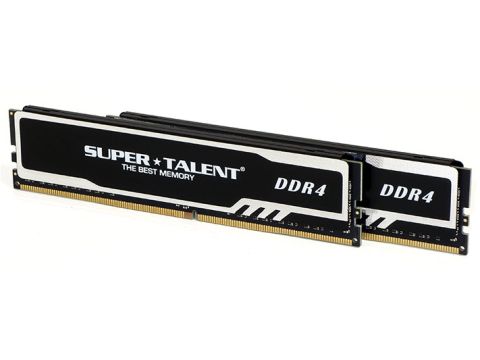 Our recent review of Teamgroup’s ROG-series RAM further exposed something we noticed long ago: The integrated memory controller of Intel’s Kaby Lake CPU has a strong preference for four banks of memory. We knew this even before Kaby Lake launched, because that preference was also expressed in Skylake. Yet it wasn’t until we got new graphics and storage hardware that we were capable of seeing the extent of that performance benefit in a real-world test scenario. And by the way, the industry now refers to a bank of chips (ICs) as a “rank,” to avoid confusion between that and a bank of cells inside the IC.

Dual-rank refers to modules that have two separately-addressable banks of memory on the same DIMM, and Super Talent joins the party with its own version of DDR4-3000 at CAS 15. That latency rating certainly bests Teamgroup’s CAS 16 set, but you’ll have to jump down to the benchmark section to see whether or how much advantage this gives the Project X DDR4-3000. Note that dual rank is different from dual-channel in that both sides of the module must transfer data over the same 64-bit channel. Yet because these are sold in pairs, buyers get two dual-rank modules for their dual-channel motherboards.

When we say “sold in pairs,” you’ll need to contact Super Talent to order them that way. Part number F3000UX16G contains two of the firm’s Project X F3000UB8G DIMMs, and the price quote of $129 for the pair certainly beats buying two single-DIMM packs separately at $75 each.

Our earlier Super Talent DDR4-3733 review included two DIMMs, but only for validation purposes. Unfortunately, four of those single-rank modules would not combine to produce a stable DDR4-3733. And besides, those were single-ranked: We already had a four-DIMM single-rank set to show us how four total ranks could benefit performance.

Today’s test is a little different because the modules are dual-ranked, allowing us to get four ranks from only two DIMMs. But what could eight ranks do? Would the extra time needed for the memory controller to address eight ranks have a dire impact on latency? We ran an extra pair through the full benchmark set to find out.