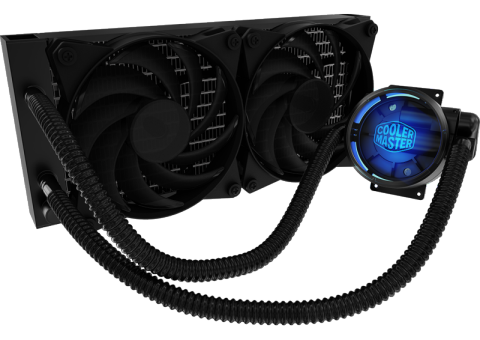 Cooler Master has been in the PC component business for as long as many builders have been alive, but more recently recognized the brilliance of its name by applying it to Master series cases and coolers. The MasterLiquid Pro 240 comes with sufficient dimensions and reasonable pricing, but can it really master its value-conscious competition?

Better accessory packaging, a double-fan noise damping gasket, and extra-heavy, vibration-damped fans set the MasterLiquid Pro 240 apart from many of its competitors. Rated at up to 66.7 CFM at 2000 RPM, Cooler Master claims a phenomenal 490,000-hour (55 years!) MTTF and an L-10 rate of a more realistic 70,000 hours (8 years). FYI, L-10 is the expected time by which the first 10% of samples have failed. A black splitter cable for those fans is also included but not shown.

The pump is also rated at an otherworldly 175,000-hour MTTF, and its 50,000-hour L-10 rating has us questioning the rationale behind its mere 2-year warranty. Those concerns aside, we can see that it appears to be a quality unit with its inspection window on top and a smooth copper mating surface beneath.

Mounting brackets slide into a notch above the base before being secured with screws.

LGA-2011x users are greeted with a set of standoffs that screw directly onto the socket’s integrated mounts, while everyone else is forced to make due with threaded posts that attach to a behind-the-motherboard support plate.

After applying thermal paste, nuts secure the head unit against the CPU’s heat spreader. The biggest problem this builder encountered was finding a flathead screwdriver both wide enough to bridge the center gap and thin enough to fit its slots.

A light aids coolant inspection, although showing Cooler Master’s logo appears to be its primary function.

Next Page Test Methods, Results And Conclusion
8 Comments Comment from the forums
Be In the Know