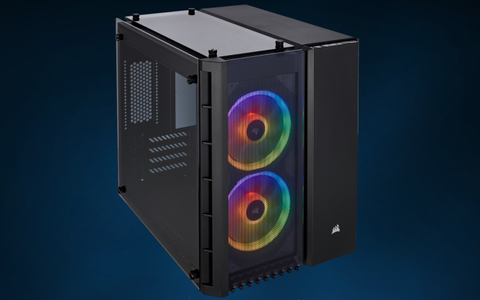 We tested the Crystal Series 280X RGB with our new Intel i9-7900X test platform. For comparison, we used the be Lian Li PC-O11 Dynamic, Lian Li Lancool One Digital and NZXT H700i to give you a good idea where this case stands against other cases that are of similar size and feature sets. For our testing we ran tests with the Crystal Series 280X RGB with both of its 120mm fans mounted in the front of the chassis, and mounted our test AIO in the top of the chassis with its fans venting air out the top of the chassis.

With fan speeds manually set at 1,400 RPM, processor temps maxed out at 62°C over the ambient temperature of 25°C. Although that is higher than most of the cases we tested the 280X RGB against, those are still pretty good temps. Keep in mind, results using an air cooler and the fans in stock configuration (one 120mm fan in front, one in the top) will no doubt result in higher temperatures than what you see here today.

With both Corsair LL120 RGB fans mounted in the front of the chassis, graphics card temperatures peaked at 48 degrees Celsius over the ambient. These results put the 280X RGB neck and neck with the NZXT H700i and Riotoro CR500 TG. Again, these results would definitely be higher with the fans in stock configuration.

The tempered glass panels on four of the chassis' six sides kept sound output to a minimum. At 31.5 dBA with our test system under full load, and 29.2 dBA at idle, the 280X RGB generated noise levels that landed it right in the middle of the pack.

The value of a case will vary from person to person but the Crystal Series 280X RGB is already a relatively expensive chassis and, to achieve our test results, you are going to have to factor in an all-in-one cooling solution. Also, the additional fans improved overall thermal performance, but  almost certainly produced elevated noise levels and negatively impacted our acoustic-efficiency rating.

Overall Corsair's Crystal Series 280X RGB is a very nice chassis that is so close to greatness but, in the end, it is falls just shy of award territory due to its price and shortcomings such as lack of USB 3.1 Type-C. This chassis is available in a non-RGB version for $99, leaving you budget to buy your own RGB fans. Both versions come with either a black or white finish.