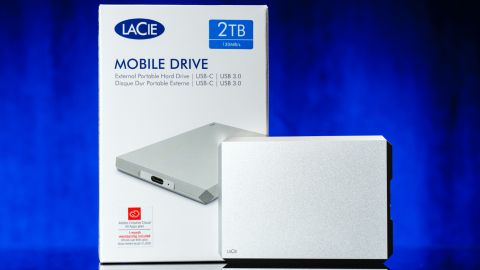 To gauge the performance of the LaCie Mobile Drive, we’ve opted to pit it against a few other external SSDs and HDDs that use Thunderbolt 3 and various USB interfaces. Included are results for the 4TB Rugged RAID Pro, which utilizes two 2.5” HDDs in RAID 0. Next, we’ve taken out the 1TB SanDisk Extreme Portable SSD and 480GB Kingston HyperX Savage EXO, both SATA, SSD-based competitors. As well,, we included some Thunderbolt 3-based competition to stir things up a bit, just to show how fast these SSDs really are over HDD competition. These included a 1TB G-Technology G-Drive mobile Pro and 1TB Samsung X5.

When it comes to moving real files, LaCie’s Mobile Drive did pretty well considering its slow 2.5-inch HDD within. It came in the last place across the board in both writing in reading. It wrote our photos folder at 105 MBps, the movies folder at 132 MBps, and our docs folder at 91 MBps. Reading back large files resulted in an average speed of about 120 MBps.

In PCMark 8, LaCie’s Mobile drive scored 1,585 points in total and averaged just 5 MBps, plopping it into last place. If you are for a drive in your professional workflow for anything other than backup, we suggest looking elsewhere to flash-based SSD alternatives.

Just as in PCMark 8, the LaCie Mobile Drive ranks last on our ATTO charts. Sequential speeds hit nearly 140 MBps in both read and write.

LaCie’s Mobile Drive falls into the last place on our charts once gain. It maxes out at  roughly 140 MBps read/write. Random read latency comes in at 8ms at best, while write latency is much lower at just 3ms. While these numbers are decent for a hard drive, they pale in comparison to something like the HyperX Savage EXO and SanDisk Extreme SSDs.

Write speed and temperature are two important and inter-related metrics for external devices. We threw in this one last test to measure the performance of the drive over a 15-minute window. When possible, we also log the temperature of the drive via the S.M.A.R.T. data to see when (or if) thermal throttling kicks in and how it impacts performance. Bear in mind that results will vary based on the workload and ambient air temperature.

Sequentially writing to the drive results in the slowest rate out of the test group, taking 15 minutes to write just 84GB. Over the course of writing the data, we logged the highest temperature of 38C, which isn’t too hot at all.