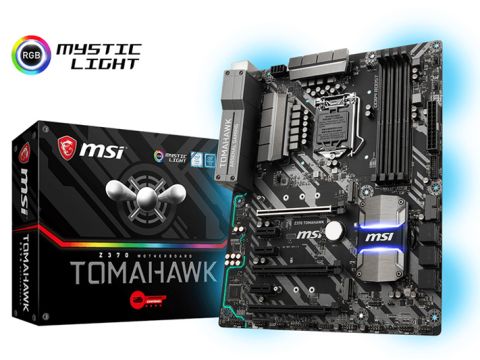 Cheaper than a Mini-ITX Z370 solution and capable of supporting a couple more PCIe x1 cards (albeit with some clear limitations), the full-ATX Z370 Tomahawk is a solid entry point for tight-budgeted gaming-PC builders.

PC enthusiasts and early adopters of a new platform have come to expect high prices, even when shopping on a “tight” budget. Perhaps it’s because we know we’re paying for lower-volume products, where the development and production configuration costs are spread across fewer buyers. Whatever the psychology, the result was that we expected the high-end “Z” version of Intel’s mainstream platform to have a starting price of around $160. Anything less would require a sacrifice in component quality or basic features, right? And if a company is determined to maintain quality, which basic features should be cut to get that board down to $150?

MSI’s Tomahawk comes with limited RGB, which makes sense, since many buyers have never really wanted to pay for that feature, anyway. Those few who swoon over RGB, however, likely won’t be disappointed by its minimization at this price level, while others who passionately hate it can simply turn it off. But that’s not the only feature that MSI scaled back on this relative "budget" Z370 board.

To begin with, most of those slots are for looks. The top slot is fixed at 16 lanes, so the rest can only be fed by the Z370 PCH, which we all know has limited resources, specifically in its 30 flexible HSIO pathways that can be purposed as PCIe, SATA, or USB 3.0. Four of those are needed by the first M.2 slot, eight for front and back panel USB 3.0, two for the USB 3.1 controller, and one by the fixed-pathway bottom slot. The pathways are half accounted for before we even touch the middle slot, the second M.2 slot, or the SATA ports.

The biggest surprise is probably that MSI decided to keep its I/O-panel Type-C port at full 10Gb/s spec, using the same high-bandwidth ASM3142 controller as found on more expensive boards. That means the adjacent Type-A port also gets 10Gb/s. We’ve already tested a pricier board that omitted the feature altogether, and two other pricier boards that used an older, slower controller to reduce cost.

We’d like to remind everyone that USB 2.0 ports are perfect for keyboards and mice, while having the advantage of not using HSIO resources. The PS/2 port, likewise, is a “freebie” from a resource standpoint, and we’re sure a few people still have a classic keyboard or mouse they’d wish to put there. The Z370 Tomahawk I/O panel also includes four USB 3.0 ports, DVI-D and HDMI video outputs, a Gigabit Ethernet jack, five analog audio jacks, and a digital optical audio output.

Now, about those slots? First, we realized long ago that the slot under a graphics card is usually worthless because most of our readers were using graphics cards with double-slot coolers. MSI knows that, as well, so it wired the top two PCIe x1 slots to the same pathway. You can use one or the other. Given that most users can’t even get to the top x1, we’d have preferred that MSI would have just left it off.

The middle slot has an x16 connector with up to four of the chipset’s pathways, but it gets shut off as soon as a builder sticks an NVMe drive in the second M.2 slot. MSI certainly saved money on switches by not feeding the middle slot with eight lanes from the top slot, but the PCIe switch wasted on the two top x1 slots causes us to question its cost-savings priorities.

Building with two NVMe M.2 drives leaves you only one other place to put a second graphics card: the bottom slot, which, as we already noted, has only one lane. MSI could have used an open-ended x1 slot to accomplish the same goal, aside from the marketing impact of buyers seeing an x16-length connector in that location.

Perhaps the designer originally planned four lanes for the bottom slot? Adding the six SATA ports brings our count to 27 out of 30 HSIO pathways, so three more lanes might have been available. Then again, the entire Z370 PCH connects to the CPU by only four pathways, and there’s nothing MSI could do about that.

It looks like nearly all of MSI’s economizations focused on slot configuration, as the remaining layout is darned good. The COM port header just forward of front-panel audio seems a little out of place on a modern board, but these remain common on less-expensive boards for some reason. (Perhaps for legacy dongles?) Forward from that is one of the six four-pin fan headers, the board’s single RGB header, an LED demo connector, a TPM header, two USB 2.0 headers, a beep-code speaker header, an AC-97-style front-panel LED/switch header, and another four-pin fan header. All six fan headers can be manually configured between PWM or voltage control mode, or left to automatic detection.

The six SATA ports and one USB 3.0 header face forward to slip under cards, and the other USB 3.0 header is located above the uppermost card slot to avoid installation conflict.

Next Page Software & Firmware
6 Comments Comment from the forums