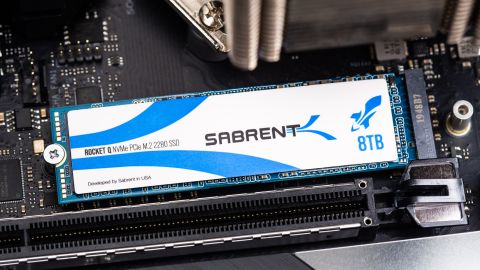 Sabrent’s Rocket Q scores second to last in the game load testing. While the slowest result in the flash bunch, it basically ties the Patriot Viper VPR100 and is only half a second off from the faster Sabrent Rocket NVMe 4.0 throughout five game loading scenes. Compared to the HDD, the Rocket Q provides much faster performance and smoother file loads into memory.

We use the DiskBench storage benchmarking tool to test file transfer performance with our own custom blocks of data. Our 50GB data set includes 31,227 files of various types, like pictures, PDFs, and videos. Our 100GB includes 22,579 files with 50GB of them being large movies. We copy the data sets to new folders and then follow-up with a reading test of a newly written 6.5GB zip file and 15GB movie file.

The Rocket Q delivers fantastic read performance and scores sixth and fourth place in the 50GB and 100GB file copies, respectively, which mixes it right in with most of the mainstream contenders. It even outperforms the TLC Viper VPR100 by a significant margin and trades blows with the WD Black SN750. The Rocket Q is proving worthy of its name: Intel’s SSD 660p cannot keep up with its slower 4-channel architecture. When it comes to file processing, the Rocket will leave an HDD in the dust.

Sabrent’s Rocket Q scores third in PCMark 10’s data and quick system benchmarks, which show off its responsiveness to data requests during most day-to-day activity. It didn't do as well when we pushed a bit harder in the full system drive benchmark. The Rocket Q's performance fell behind most of the mainstream competition, but even when we push it hard, it offers better performance than WD’s high-end Black SN750.

Sabrent’s Rocket Q performed well after being bombarded by SPECworkstation 3’s many write-intensive tests. It completed the tasks in just under half an hour and delivers a relatively similar experience to the Intel SSD 660p, Patriot Viper VPR100 and WD Black SN750. It also managed to perform the tasks more than five hours faster than WD’s Black HDD. Even with QLC’s slower write performance outside of the SLC write cache, the Rocket Q provided significantly better all-around performance than the WD Black HDD.

We tested Sabrent’s Rocket Q at a queue depth (QD) of 1, representing most day to day file access at various block sizes. It nearlyes match the Viper VPR100’s, as well as the other mainstream contenders, with peaks around 3/2.8 GBps. The drive even proves much more responsive at smaller file sizes than the WD Black SN750, and offers almost double the throughput of the Intel SSD 660p.

The Rocket Q’s sequential read and write performance peaks at just under 3.5/3 GBps, with read performance exceeding the rated specification by a healthy 278 MBps margin. 4KB random read and write responsiveness is amongst the fastest of the bunch, coming in third place in reads and first place in write latency at QD1. The Rocket Q even beats the costlier Rocket NVMe 4.0’s results at low queue depths because the Gen 4 interface gives the Rocket NVMe 4.0 the upper hand in sequential workloads and lower latency at higher QDs.

Sabrent’s Rocket Q features a large dynamic write cache. The SLC write cache will measure about a quarter of the total free capacity, meaning that, if empty, the drive can sustain about 520GB of writes before write performance degrades. Performance tanks when the cache is full, just as one would expect from a QLC SSD. The drive averages about 200 MBps after the cache is full. It will recover a lot of the cache quickly after some idle time, though. Our 2TB model recovered at about 40GB per minute. After five minutes of idle time, the drive freed up about 200GB of write cache.

We use the Quarch HD Programmable Power Module to gain a deeper understanding of power characteristics. Idle power consumption is an important aspect to consider, especially if you're looking for a laptop upgrade. Some SSDs can consume watts of power at idle while better-suited ones sip just milliwatts. Average workload power consumption and max consumption are two other aspects of power consumption, but performance-per-watt is more important. A drive might consume more power during any given workload, but accomplishing a task faster allows the drive to drop into an idle state faster, which ultimately saves power.

On average, the Rocket Q's combination of the Phison E12S controller and Micron 96L QLC flash consumes less power than any other mainstream or high-end SSD in our test pool. This propels it into second place on our efficiency-per-watt chart, trailing only the Adata XPG SX8200 Pro. At idle, Sabrent’s Rocket Q will fall into lower power states to help save on power consumption (if you enable the feature in the UEFI and Windows).

The Rocket Q manages its temperature by thermal throttling based on the S.M.A.R.T. data. The controller is rated to start throttling around 75-80 degrees Celsius (C). We hammered the drive, moving around 400GB of data to and from the drive. The SSD performed fine without throttling as long as we provided adequate airflow. Without airflow, however, thermal throttling may occur during large copy operations and write workloads.

The S.M.A.R.T. data reported a maximum temperature of 64C in a 24C room, but that measurement must come from the NAND, as that is what we measured with our infrared thermometer. The controller measured a little higher at around 71C, which triggered throttling.