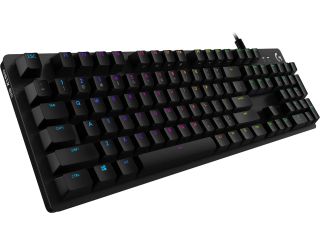 Finding the right mechanical keyboard can be tricky. There’s a bevy of them to choose from out there, so picking up one that’s got the right layout, the right looks, and the right switch is, well, without experiencing it first hand, a risk. Logitech’s long been a pioneer on the mechanical keyboard warfront however, and it goes to show with this killer Cyber Monday deal. Yep, Logitech’s G512 Lightsync RGB Special Edition keyboard is now on sale for just $60, that’s near $40 off its retail price for a 40% saving.

Yeah we’re not entirely sure why Logitech is referring to these switches in such a mundane “clicky” manner, especially when it already has the likes of the aptly named Romer-G Tactile switch, (which already sounds pretty cool right?) However there are some noticeable differences between the two key switches. Although both are rated for 70 million keypresses, the actuation distance for the GX Blue switches featured here is slightly higher than that of the Romer-G, meaning quicker response times in game, on top of that, the GX Blue’s also have a bigger travel range (4.0mm versus 3.2mm), and require an extra 5g of force to press down (50g versus 45g).

Switch aside, the G512 SE also comes with a USB 2.0 passthrough for mice and other peripherals, per key lighting courtesy of Logitech’s LightSync software, integrated media keys accessible via the function keys, a couple of game modes, programmable FN keys via Logitech’s G HUB suite, and that’s about it. It’s a clean cut, swathe looking board, complete with beautifully noise tactile switches designed to make you forget about the world and just enjoy your typing and gaming experience, clackety switches and all.