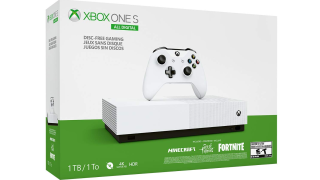 Here at Tom's Hardware, we're really big on PC gaming. But even if you have a liquid-cooled, dual-video card desktop, there's room in your life for a console. Perhaps there are games you can't play on your PC or you just want a device in the living room that you can use to play with your kids.

And if you were thinking of buying an XBox, there's probably never been a console deal this cheap. Reduced from $199 to $149, this configuration of the XBox One S has a 1TB hard drive and outputs in sharp, 4K resolution.  That's the kind of price you pay for a preowned system, if you're lucky, but because we're in black friday tech deals season, you get it new.

XBox One S (1TB / 4K / no discs): was $199 now $149
For this ridiculously low price, you get a brand new XBox One S that supports 4K output and has a 1TB hard drive. The only catch? It doesn't have a disc drive so all of your games will have to be digital downloads.
View Deal

The one downside to this XBox, and it will be a deal-killer for some, is that it doesn't have an optical drive. So if you have any games on disc or were planning to buy some, you'd be unable to play them on this machine. All games have to be purchased and downloaded digitally.

On the bright side, who wants to keep a cabinet full of physical discs that you can easily lose or scratch? The 1TB hard drive is probably more than you'll ever need (though you can always attach an external drive for more) so you shouldn't worry about filling it up.