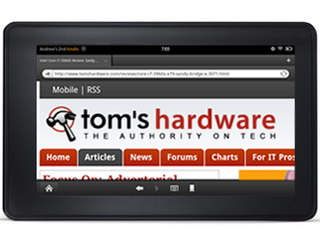 When Amazon announced it was going to produce a tablet, we weren't surprised. At some point, everyone knew that the company would expand beyond its e-reader base and jump onto the more functional tablet bandwagon. The question was always how far, exactly, Amazon would go in bridging the divide between its popular Kindle and successful tablets like Apple's iPad 2. After using the Kindle Fire for the last week, we can say it's probably not what you were expecting.

Let's start with what the Kindle Fire is not: it isn't an iPad killer. But that doesn't make it a bad product. In fact, that's not even a fair comparison, really. If you've already started reading reviews of the Fire, then you know this is a different beast intended for a different type of customer.

Physically, the Kindle Fire is hardly even comparable to the 10.1" tablets we've reviewed. It's 0.3" thick and weighs 0.89 pounds, making it thicker and heavier than many models with larger screens. The Fire's 7" display gives it a look similar to Research in Motion's smaller PlayBook.

Aside from the power button on the bottom of the Fire, Amazon's tablet is otherwise button-free. And while there's a headphone port, there is no dedicated volume control. The speakers are up along the top edge, and the whole tablet is surrounded by a rubberized plastic shell, similar to Toshiba's Thrive. The difference is that Amazon opted for a smooth finish, so it's easier to see fingerprint build-up.

Even compared to 7" Android-based tablets, the Kindle Fire is still a completely different piece of hardware, intended to serve a unique purpose. Notably, it's missing a slew of features, including a GPS, front- and rear-facing cameras, and a microphone. That rules out video conferencing using Skype or mapping out directions to the bar across town. Clearly, when Amazon designed its Fire, it was going for a device more similar to its e-book readers.

This makes sense, of course. The company's priority was never to replace your netbook, or even to give you a jaw-dropping tablet experience. Amazon makes its money by selling products and services, and its Kindle Fire makes it easier to consume both. If you're already a fan of Amazon's offerings, this is a tablet that caters to your base desires.