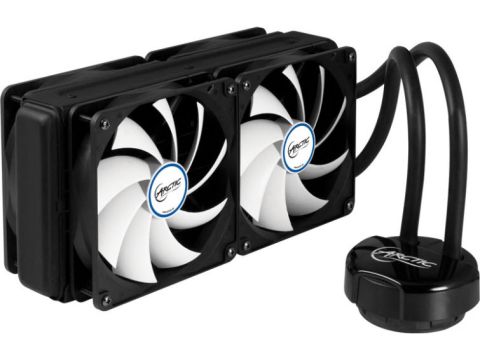 Some of Arctic’s toughest closed-loop competition comes from Chinese brands with an American presence, both on the pricing and performance scale. ID-Cooling’s Frostflow 240L for example has proven itself formidable even against units priced up to 50% higher, and the Gamer Storm Captain 240 is no slouch either. Rather than create a false value narrative by comparing under-performing expensive models, we’re throwing the Liquid Freezer 240 right up against those two best-value models.

Arctic’s two-year warranty resembles those of ID-Cooling and Deepcool (Gamer Storm), but only at first blush. According to Arctic’s website: "ARCTIC does not offer a manufacturer warranty." Warranty returns are at the discretion of the seller, and Arctic is responsible to the seller (its direct customer) when a product is found defective. Buyers can expect no assistance when the seller refuses to act as an intermediary (or goes out of business).

[Update: Arctic contacted us to let us know that it has changed its warranty policy. Its new RMA instructions can be found at https://www.arctic.ac/de_en/rma/.]

Thanks to its thick radiator and airflow-boosting fan-sandwich configuration, the Liquid Freezer 240 beats even the unbelievably cool Frostflow 240L in our thermal test. It even wins in its worst-performing configuration.

You may have also noticed that the Liquid Freezer 240 performs better when set as exhaust. Once again we’re going to ignore the miniscule impact of rising heat and instead credit the lower pressure difference, since our front fans are always tested as intakes.

While it appears that the fan speed actually goes down when the Liquid Freezer 240 is mounted as exhaust, the measurements on the charts are only coming from the fastest layer of fans. Our test notes show that while the fastest fan slowed from 1560 to 1420 RPM, the slowest fan sped up from 1340 to 1420 RPM.

The Liquid Freezer 240 is always quieter than either the Frostflow 240L or the Captain 240. Higher noise in its top-intake configuration is likely due to windage, as fan blades that are close to a case’s vent holes create a whistling noise as they pass each hole. When mounted as exhaust, fan frames act as spacers to prevent that noise.

Acoustic Efficiency, or the comparison of temperature to noise, is the true measure of a cooler’s overall performance. Arctic’s Liquid Freezer 240 destroys its rivals.

While we didn't include the Liquid Freezer 240's oversized rivals in the charts of this review, it outperforms them all, even making its higher price (by about $10) worth it. And, remembering that the coolers we compared directly in this review are some of the cheapest high-performance parts available, the Liquid Freezer 240 is still cheaper than most of its other rivals.

Astounding performance superiority easily opens the Liquid Freezer 240 to our elite “Editor’s Choice” award, but would this editor actually choose it? Unfortunately, its 3.6” thickness doesn’t fit any of my cases! I even had to offset it within the case of our own test machine, using vent holes rather than mounting holes to secure the radiator and fan sandwich. We have, however, tested cases with fairly severe default radiator offset, and those cases allow the cooler to hang well past the top of the motherboard and even below the tops of some memory modules.

Normally a fitment issue like that might exclude a product from making our “Recommended” list, yet the relatively broad availability of cases with significant radiator offset makes the case against this award less clear. Two things are clear in that buyers get superior cooling for under $100, and that warranty replacement is at the discretion of the seller. Thus, I’m recommending that new system builders keep this cooler in mind when choosing a case, and restricting its recommendation to cases that support it when purchased from trustworthy sellers.