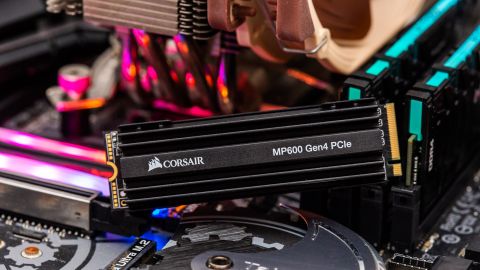 As we saw with our engineering sample before, games aren’t going to load any faster with the new interface. The MP600 scores a total load time of 11.45 seconds, an average score that lands it fifth place overall. While not much different than other NVMe SSDs, it is more than twice as fast as the HDD.

A system clone or restoration isn’t something many people do often. But it can become a time-consuming task with slow storage devices like HDDs or entry-level SSDs - especially if you have a lot of data. Therefore, we developed a test to measure how long this task takes. To ensure repeatable results, we secure erase each SSD to ensure the pSLC cache is empty before we restore an average-sized 222GB operating system and files from a 1.5TB Intel Optane SSD 905P.

System image restoration goes off without a hitch. Our restore operation is mostly limited by the software rather than device throughput. But, still, the Intel 660p’s smaller cache paired with slow direct to QLC write speeds caused for a much longer restoration time. Corsair ranks first overall, with a restoration time of 8 minutes and 31 seconds.

File copy performance is up there with the best. With a lot of small files included in our test folders, the MP600 wasn’t as fast as Intel's Optane 905P, since it’s 4K random read performance is so much better than any flash-based competitor. But being slower by just 25 MBps on average, the MP600 ranks second overall.  During the file read back test, however, the MP600 easily scored first place with a speed of 2,875 MBps, a 13x improvement over the HDD.

In application testing, Intel’s Optane 905P scored first place again and Samsung’s 970 PRO scored second. Corsair’s MP600 scored third, just a point below the 970 PRO and an average in bandwidth just 15 MBps behind. This is a fantastic jump from the previous generation Corsair Force MP510, which landed sixth place with an average bandwidth of just 585 MBps.

When working with professional software, Intel’s Optane 905P is the way to go if you are looking for the best performance, but the MP600 isn’t too far behind. With a final score of 4.66 and completion time of just over 25 minutes, it gains a win over the Samsung 970 PRO and proves to be a worthy choice for most prosumers looking for a drive that can keep up with their workflow.

ATTO is a simple and free application that SSD vendors commonly use to assign sequential performance specifications to their products. It also gives us insight into how the device handles different file sizes. We test at a QD of 1, which better represents consumer performance, instead of the default value of 4.

In ATTO, the Force MP600 outperforms every other drive from the 16KB file size and up. Even at the lowest QD of 1, it is capable of sequential performance that hits 4.8 /3.9 GBps read/write.

In iometer, Corsair’s Force MP600 shows off 5/4.3 GBps read/write results. This is a big improvement over any PCIe 3.0 SSD and gives it first place in sequential performance.

With its high-speed performance, the Corsair Force MP600 has a large write cache to go along with it. While the SLC cache is officially rated to be 333GB from Phison, the Force MP600 was able to sustain over 370GB of writes at a pace of just under 4.3 GBps before performance declined. Once the cache was full, write speeds dropped to about 600 MBps on average.

Power consumption is very similar to other NVMe SSDs. On average the Corsair drive drew 3.95W during the 50GB transfer test and peaked at 6.43W. But, once combined with its speed, it outranks and is more efficient than every other SSD we've tested. Even at idle, it draws only 64mW when ASPM is enabled and 1.2W when not.