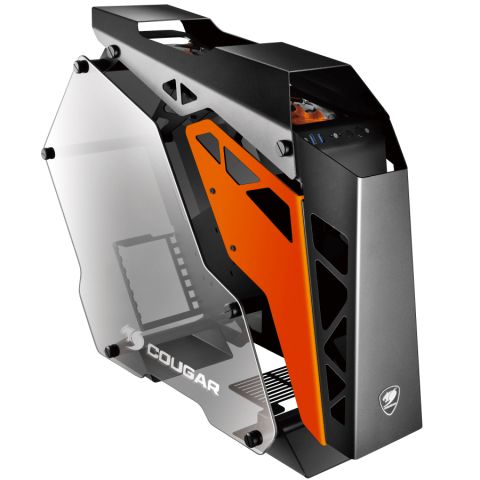 The Cougar Conquer performs so well that show builder systems probably shouldn’t immediately be discouraged by our sample’s single defect, but should instead follow up by reading customer reviews.

Ah, the process of standardization. Standardization allows people to put any ATX motherboard in any ATX case, and the one way that can go wrong is if one of those two items violates the form factor. When it comes to motherboards, the term “form factor” is so specific that a buyer need not question anything. It’s the reason I’ve removed the term “small form factor” from so many articles: We need to know what fits! So if “Mid Tower” isn’t a form factor, what is it? A style? Cougar is the latest company to blur the lines in an open-air chassis that fits into either the “Mid Tower” or “Full Tower” category, depending on where it’s measured.

An open platform that doesn’t have so much as a back panel, the Conquer has enough interior space to fit an EATX motherboard but no mechanical support for full-spec (13”) models, and some of the rest depends on fan and radiator placement, which all turns into a complicated series of calculations given its non-rectangular interior. More important is that the case fits most gaming hardware, including those ~10.6” boards that so often carry the EATX label and can even hold a graphics card up to 15” long with its drive tray installed.

Tom’s Hardware doesn’t usually favor unboxing photos, but the Cougar’s unusual packaging is worth a look since it arrives unassembled. Builders are left to peel back the layers to reveal additional pieces.

Those pieces include three fans with grills, several adhesive cable ties and tabs, several screw packs, two feet, a power supply bracket and tray, a drive tray that supports either two 2.5” or one 3.5” drive, and five cross braces. Two more 2.5” or 3.5” drives can be mounted to the back of the motherboard tray prior to motherboard installation.

The Conquer top panel supports 2x 120mm radiators up front and 3x 120mm on top, and the upper structural panel opening is large enough to feed through hose fittings from above, if desired. Since the chassis includes three fans, we placed these there.

The drive tray fits just inside of the upper portion of the red panel, and drives can be mounted on either side. The power supply mounting bracket can be slid forward to alternative mounting holes to get it closer to the slot-vented support shelf, if desired.

Though lighting is the obvious difference, our image of the assembled Conquer also differs from the one prepared by Cougar in that we’ve installed the standoffs, fan grills, and power supply mounting bracket, in addition to the power supply support shelf.

Unlike the red shroud of the left side, the right flank is part of the motherboard tray and face panel and thus gets the black treatment. If you’re wondering why it’s missing one of its five screws . . . .

We didn’t install the last screw because its hole was cut in the wrong place. Checking all the measurements didn’t help, and everything was straight, but comparing the left panel to the right proved that this was nothing other than an unusual manufacturing defect. Cougar would have replaced the glass for us, but that wasn’t needed to complete today’s analysis since its rubber cushion pressed firmly against the stand that it was supposed to be screwed onto (hence the defect caused no additional vibration).