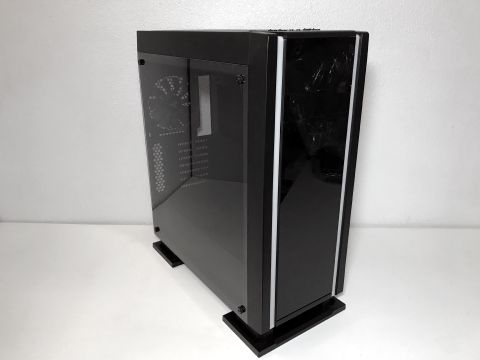 We tested the Saberay RGB case with our new Intel i9-7900X test platform. For comparison, we brought in the Cougar Panzer EVO RGB, the NZXT H700i and the be quiet! Dark Base 700 to give you a solid idea where this case stands against other cases that are of similar size and feature sets.

CPU core temperatures on our Intel i9-7900X processor running at 4GHz were very good considering the sheer amount of heat this processor is capable of generating under load. Given the fact that the Saberay RGB is outfitted with triple 120mm intake fans, we expected the chassis to be more than capable of keeping system temperatures in check.

We set intake fans speeds at max (1400RPM). For our first round of testing, we used the optional mesh front panel and, under load, our processor temps held steady at 62°C over the ambient temperature of 25°C (77°F). With the mesh panel in place, the Saberay RGB was in a dead heat with the Dark Base 700 but behind both the H700i and the Panzer EVO RGB. Unfortunately our CPU temperatures jumped a full 5°C with the default acrylic panel installed.

Once again, with the mesh panel installed for testing, GPU temps peaked at 51°C over the ambient temperature. Given the sheer amount of airflow and close proximity of the intake fans to the GPU, we expected results closer to those of others in the comparison group. As with our CPU results, we saw GPU temps increase by more than 10 percent on the Saberay RGB, easily the highest temperatures of the test group.

We took sound level readings with two off-the-shelf dB meters from two different angles. The Saberay RGB registered 30.3dB at idle and 32.8dB under load with the acrylic panel. Those results increased to 31.3dB and 34.4dB, respectively, with the mesh front panel in place.

Cooling efficiency and noise levels are both ways to measure performance. Determining acoustic efficiency, also referred to as "cooling-to-noise ratio," is a matter of averaging all five of our tests to determine a base value.

We really wanted to like the Saberay RGB. It's big, bold and has RGB functionality in spades. But, when it came right down to it, the poor build quality, oddball design choices and lack-luster cooling performance are simply unacceptable at this price point. Consumers would be better off with the Cooler Master MasterCase H500P Mesh for a lower price of $149.99 or spending a few extra dollars for the Cougar Panzer EVO RGB at $219.99