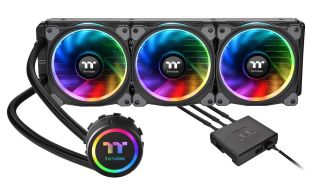 If you're after a Cyber Monday deal on cooling, Thermaltake's 360 mm Floe Triple Riing liquid cooler is now available on Amazon.com for just $136. That's  notably lower than the $170 - $180 it has been retailing for at many places. At that price, the temptation to use a 360 mm unit over a 240 mm model is hard to resist -- whether your CPU needs it or not.

This liquid cooler's RGB implementation can be controlled through the Riing Plus RGB software, where you can change light colors, modes, mode speeds, brightness, and of course control the fan speeds. The three fans can run at speeds between 500 and 1400 RPM, which is a nice range to go from "quiet" to "what did you say? I can't hear you. I'm too close to the PC."

The pump on this cooler is attached to the radiator through long braided hoses, so unless you've got a particularly weird case layout you shouldn't have any issues with the pump (which contains the cold plate) reaching your CPU.

This unit supports all modern CPU sockets, including Intel's LGA2066, 2011, and 115x sockets. The same goes for AMD, supporting almost all sockets since AM2 up to AM4, but more notably TR4. That's where this cooler might make most sense: on an AMD Threadripper system that requires truly epic cooling power.