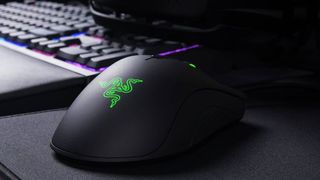 Update: Cyber Monday's well on the way, and we're seeing a few fresh deals crop up, and interestingly some adjustments on deals that have already been live. This being one of them, Razer's DeathAdder Elite has had its price dropped by a further $5 at Bestbuy bringing the savings down to an impressive $45 off its retail price, that's an incredible 64% saving

That’s near 64% off, one of the best FPS gaming mice out there. Suitable for all types of right-handed grip (palm, claw or fingertip), Razer has really nailed the overall ergonomic design of the Deathadder Elite. It’s long been renowned as the king of eSports mice. And with over 13 years of iterative design under its belt the latest variant certainly doesn’t hold back.

For that meagre $25 outlay you net yourself a true king of optical sensors the PixArt PMW 3389, capable of driving CPI all the way up to 16,000. It also packs in a max IPS rating of 450 (or 11.43 m/s), and can handle upwards of 50Gs worth of acceleration before losing effective tracking. In our experience we found the DeathAdder Elite to track well, it was easy to move and flick around, to get those critical shots in without having to worry.

Don’t just forsake this thing for a FPS king either,and more than capable in RPGs and RTSs (although MMO fans may struggle). It's comfortable too, the flared left and right click buttons, cushion your fingers well, and the overall shape is conducive to good ergonomics. It’s also finished in a sandblasted black plastic to help alleviate greasy fingerprints and sweat.

It’s perhaps a bit heavier than some of the super sharp FPS oriented mice we’ve seen lately, such as the Glorious Model O Minus, that sails in at just under 58g, but that’s not something that we see as a massive detriment to the mouse, given the pedigree this thing comes with.

There’s definitely a simplicity to it, but you’ll find that with a lot of FPS oriented mice. Those two side buttons are pretty much all you get. There’s an additional two buttons located behind the scroll wheel but these are primarily allocated to CPI switching. It’s not as complex as, say, the Logitech G502, or even the Razer Basilisk Ultimate, but that’s not necessarily a bad thing.

Razer Synapse 3 is also a solid software suite, and it’s fairly easy to utilize if you want to configure your RGB lighting, set macros, adjust CPI settings and profiles and more.

Well aside from a lack of buttons, the only other thing we can comment on is the lack of weight adjustment. That aside, at this price point, and with a two year warranty, these are problems we’d happily ignore.