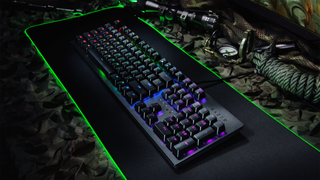 Update: Unfortunately this deal is now out of stock, we'll update this article if it comes back on sale.

“Simplicity is the ultimate sophistication” Leonardo Da Vinci once reportedly said, and that’s something Razer’s absolutely taken to heart with its Huntsman Opto-mechanical keyboard. This full-size board is fairly new to Razer’s lineup, launching just under a year ago, however it’s not the first time we’ve seen an optical switch grace the world of the keyboard. In fact Wooting was the first to pioneer the technology, where it used light to correctly measure the actuation point time and time again. Razer took that idea and conceptualized it into its own mechanical switches, giving us the Razer Purple, and combined with the subtle, sleek and beautifully simple design of the Huntsman, oh boy is it a good combination.

Razer’s Huntsman is currently on sale this Cyber Monday for a svelte $86 for an impressive 43% saving on its retail price, in fact it gets better than that, as this keyboard regularly averages $140, so you’re absolutely getting a deal here.

Razer Huntsman Gaming Keyboard: was $150, now $86
This full-size keyboard comes complete with Razer’s Purple mechanical switch, and a sleek RGB filled design, that really does make it one of the nicest keyboards we’ve ever seen.

In fact, it's one of the nicest switches I’ve ever had the pleasure to type and game with. It’s a fantastically crisp clean sound, there’s a tactile bump midway down, and plenty of travel to make each keystroke feel committed. The actuation point is very precise, although admittedly, I’ve never had a problem with a standard switch. That said, it’s nice to have a keyboard that you know works flawlessly. If you lose a game because you didn’t step out of the fire fast enough, that’s on you, not the gear you’re using, and in that way it’s kinda satisfying.

Switches aside the board itself is very clean, the black sandblasted aluminum finish looks crazy good. There’s integrated media controls baked into the Function keys along the top, and as soon as you hit the Fn switch hidden next to the bottom right Alt, all other key switches turn off the RGB and the media keys remain lit.

Cons? Well it is a bit noisy, especially if you live with family, or friends, but if I’m honest, meh, it sounds awesome. On top of that unlike the Huntsman Elite it doesn’t have dedicated media controls, and it is a hard wired cable connection too, so there’s a potential vulnerability there if it breaks or frays in the future. All that aside, it’s just an impressive full-size board, it won our Editor’s Choice award back in June, and well, that’s all we can really say. You can read our full review of the Razer Huntsman here for more detail.