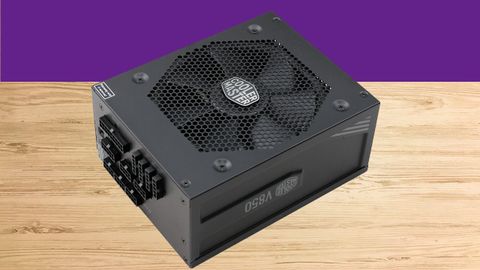 The load regulation is tight enough on all rails but the 5VSB one, where the deviation is close to 3.6%.

The hold-up time is longer than 20ms, but to our surprise the power ok signal is inaccurate. This is unacceptable of course.

The inrush current is at normal levels with 115V and pretty high with 230V.

Under high temperatures and with 20% and 50% load, the PSU doesn't reach the efficiency numbers that the 80 PLUS Platinum standard requires. Under full load, it manages to go over 89%, though.

Besides the loud fan noise, we didn't encounter any problem stressing the unit with full and even more power, under high operating temperatures. The V850 power supply is resilient to harsh conditions.

In the following tests, we measure the V850's efficiency at loads significantly lower than 10% of its maximum capacity (the lowest load the 80 PLUS standard measures). This is important for representing when a PC is idle, with power-saving features turned on.

Next, we plotted a chart showing the V850’s efficiency at low loads, and loads from 10 to 110% of its maximum-rated capacity. The higher a PSU’s efficiency the less energy goes wasted leading to a reduced carbon footprint, besides lower electricity bills.

The Cooler Master V850 Platinum achieves low efficiency numbers in both our normal and light load tests. Especially in the latter, the differences are notable with the units that we used for comparison purposes.

As it was the case with the V1300, the 5VSB rail is highly efficient. Clearly the 5VSB circuit is identical in those two models.

The fan speed profile could be a bit smoother, under high operating temperatures. With 510W load the 767 RPM while with 85W more it increases its speed to 1206 RPM, outputting 12.7 dB(A) more.

With normal ambient temperatures and up to 500W loads, the power supply's noise stays below 20 dB(A), which is equivalent to the noise of a broadcast/recording studio. With more than 650W it enters the 30-35 dB(A) region (quiet suburban, night time).

Prev Page Specifications and Part Analysis Next Page Protection Features, DC Power Sequencing, Cross-Load Tests and Infrared Images
No comments yet Comment from the forums
Be In the Know