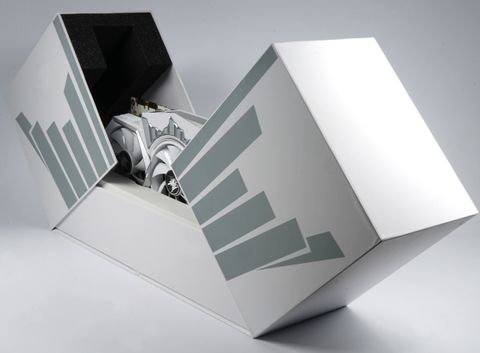 There's a lot to like about Galax's snow white GeForce GTX 1080 Ti HoF. Just be aware of its large dimensions as you plan your upgrade. What's more, the card is only available through Galax's website (at almost Titan Xp pricing, no less).

The word "subtle" definitely doesn't come to mind when describing the appearance of Galax's GeForce GTX 1080 Ti Hall of Fame (HoF) edition graphics card. Even its packaging starts out bold. The card itself is a real behemoth. Not only is it physically large, but it's heavy as well. Go big or go home, right?

Since the actual performance of any third-party card depends on the GPU Boost frequency it can sustain, and thus on cooling, power limits, and processor quality, any review that relies on bar charts is little more than a snapshot of a single specimen. That's why we're putting our emphasis on the actual implementation of each model. To that end, a lot of equipment goes into thoroughly documenting a graphics card's behaviors. If you'd like a peek at what goes into such an evaluation, check out our Nvidia GeForce GTX 1080 Ti 11GB Review. It makes for a good baseline on which Galax builds.

Galax packages this beast in a visually impressive box with two sideways-opening wings as cover. As you might imagine, this makes opening the HoF for the first time an intensely satisfying experience. But of course, it's what's inside that counts...

The bundle includes several accessories. However, for safety reasons, it would have been better off without the three Molex-to-eight-pin adapters. The combination of their 20-gauge wires and an inexpensive power supply could turn the installation into a fire hazard. And unnecessarily so, since the number of PCIe connectors you find on PSUs typically correspond to their real power output. No adapter is able to magically generate power where there was none before. If you're interested in a Galax GeForce GTX 1080 Ti HoF card, do the right thing and pair it up with a capable enthusiast-oriented PSU.

As a nice gimmick, the box comes with a so-called "LuminHold" made of acrylic glass. It provides additional RGB lighting, and can be screwed to the expansion slot and connected to the graphics card for direct lighting control. Galax's software for this is not included; instead, you'll need to download that separately. The pictured USB stick only holds the manuals as PDF files, as well as Nvidia's GeForce Experience utility.

With a hefty weight of 1.689 kg, an above-average length of 31.8cm (measured from the slot bracket's outer edge to the shroud's back), an extreme height of 14.5cm (from the top of the motherboard slot to the upper edge of the shroud), and a portly width of 5.4cm, this 2.5-slot form factor effectively gobbles up three expansion slots to become the largest card we've tested. Furthermore, the backplate requires another 0.5cm of clearance on the other side, which could affect enthusiasts with large CPU coolers.

Whether you like the shroud's mix of plastic parts is a matter of personal taste. The clean white look is still a relatively rare sight, though. To that end, the GeForce GTX 1080 Ti HoF's appearance follows the established design of previous HoF cards. So, apart from the excessive dimensions, there are no real visual surprises.

The backplate is made of brushed aluminum, coated in black on the inside, and situated in such a way that it provides a passive contribution to the overall cooling solution.

Up top, you'll find a back-lit LCD and three eight-pin auxiliary power connectors. Those PCIe connectors are rotated by 180° and positioned at the PCB's end.

The black-and-white display has a rather low resolution. It is designed to either display just a logo, or (once the appropriate software is installed) clock rates, fan speeds, voltages, and more. The effect is certainly unique, though you'll want a windowed case to show it off.

Peeking into the top and bottom reveals that the cooler's fins are oriented vertically. They also reveal the absence of a real VRM heat sink, which would have helped with cooling.

Instead, Galax adds a mounting frame positioned between cooler and board. This frame is meant to provide both additional stabilization and cooling. Unfortunately, its actual implementation is not quite perfect. More on that when we dig into thermal analysis.

The end of the card reveals four 8mm heat pipes for the right part of the cooler structure. At this angle (and from the outside), a fifth 6mm bent heat pipe is not visible.

Galax exposes a fairly standard complement of one HDMI 2.0 output, three DisplayPort 1.4-capable connectors, and a dual-link DVI-D port. Of those five interfaces, a maximum of four can be used simultaneously in a multi-monitor setup.

A GPU-Z screenshot provides the most pertinent technical information, even if the GPU Boost values we observed were much higher than Galax's official specifications.

We explained our test system and methodology in How We Test Graphics Cards. If you want to learn more about the procedures we're using in today's review, have a look at that story. In the time since it was published, we also upgraded our CPU and cooling system to rule out any possible host processing bottlenecks.

A short summary in table-form to provide a quick overview: