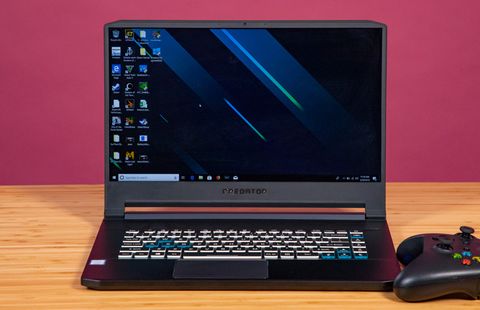 The Acer Predator Triton 500 has a sleek, lightweight design and an RTX 2060 but is riddled with too much bloatware.

With its sleek, stealthy design, you can see why Acer named its Predator Triton 500 ($1,799 / £1,799) after the Greek sea god. Its dark blue and gray look is angular, and it can play most games with its moderately powerful RTX 2060 graphics. It has a bright screen and is held back only by its mixed productivity performance and bloatware you’ll want to uninstall.

The dark gray/blue Predator is a slim, aluminum machine with some slight angles but is otherwise surprising plain. The lid features the word “Predator” in all caps with the Transformers-style logo on top. There are also some cool details on the back. The vents, with a zig-zag pattern over them, feature a blue pattern that adds a pop of color to the machine.

When the lid is up, the 15.6-inch display is surrounded by thin plastic bezels on three sides with a thicker, Predator-branded bezel on the bottom. Like the lid, the deck is made of metal. Above the keyboard, the speakers are lined up in an alternating triangular pattern. The WASD keys, arrow keys and the PredatorSense key are all blue, contributing to the color scheme and standing out from the rest of the keyboard.

There are plenty of ports for peripherals, monitors and expanded storage. On the left side are an Ethernet jack, USB 3.1 Gen 1 port, HDMI output and separate headset and microphone jacks. On the right are another pair of USB 3.1 ports, Thunderbolt 3 and Mini DisplayPort, as well as a lock slot.

The Predator is the first laptop that we’ve tested with an Nvidia GeForce RTX 2060 GPU. In tests, it stood up well with competitors running an RTX 2070 Max-Q.

When I played Battlefield V’s “Nordlys” mission on high settings with high DXR at 1920x1080 resolution, it started off hovering around 60 frames per second (fps) in a snowy field but dropped between 46 and 53 fps in a detailed town with lots of reflections, and there was quite a bit of screen tearing. But when I bumped the DXR down to medium (but left the other settings alone), I got a much smoother 66 - 77 fps, except for one instance when a house I was in collapsed on top of me and it dropped to 57 fps.

On the Shadow of the Tomb Raider benchmark (highest settings, FHD), the Predator played at 49 fps, beating the mainstream gaming average (40 fps) and the Aero (RTX 2070 Max-Q) but falling behind the Legion (RTX 2070 Max-Q). It should be noted the Aero was the first RTX laptop we’ve tested, and updates to drivers have occurred since then, which may explain the difference between it and the Legion.

When it came to Grand Theft Auto V (very high, FHD), the Predator ran the benchmark at an average of 66 fps, on par with both RTX 2070 Max-Q machines and above average (48 fps).

With an Intel Core i7-8750H CPU, 16 GB of DDR4 RAM, a 512 GB PCIe-NVMe SSD, the Triton 500 is a solid mix of power and portability. If you’re using it for some word processing, browsing the web and playing music, this is more than enough.

On our Handbrake test, which makes computers transcode a 4K video to 1080p, the Predator took 9 minutes and 58 seconds. That’s speedier than the 10:59 average, but the Legion was quicker.

The 15.6-inch, 1920x1080 display with a 144Hz refresh rate is brighter than average, and it was only Gigabyte’s color-calibrated 4K screen that bested it it on the color gamut. When I watched the trailer for Shazam!, the yellow lightning bolt on the hero’s suit popped against the red spandex, and a cashier's purple hair and shirt stood out among all of the merchandise behind her. When I played Battlefield V, the snow was bright and white against a blue sky, and a red smoke grenade was extremely vivid.

The Predator covers 116 percent of the sRGB color gamut, which is more vivid than the 112 percent mainstream gaming average but fell behind the Aero’s amazing 187 percent.

Acer’s panel measured an average 275 nits of brightness, just ahead of the average (273 nits) but slightly trailing the Aero (283 nits).

Acer’s keyboard offers 1.4 millimeters of travel and requires 68 grams of force to press, but the keys are a bit on the mushy side. On the 10fastfingers.com typing test, I reached 101 words per minute with a 3 percent error rate, both of which are worse than my usual range.

The WASD keys, arrows keys and dedicated PredatorSense button all have blue accents on the key caps. But that means that when you change the colors of the lights on two of the three zones on the keyboard, they’ll be partially tinged blue. Red lights look purple on a few keys, and yellow lights look green. That being said, it looks pretty sick with the default blue lighting it comes out of the box with.

The 4.1 x 2.5-inch touchpad uses Windows 10 precision drivers. The surface is smooth, and my navigation was accurate, but more importantly, all of Windows 10’s gestures, from two-finger swipes to using a four-finger flick to open task view, worked the first time.

The speakers on the Predator Triton 500 are nice and loud. They easily filled our lab as I listened to Hozier’s “Take Me to Church.” The vocals were crystal clear, as were the keys and drums, though the guitars occasionally got lost in the mix.

I had a better experience while playing Battlefield V. During the game, sound effects, like bullets ringing and grenades exploding, were loud and clear over the instrumental soundtrack.

There are two pieces of software you can use to customize the audio, Waves MaxxAudio and PredatorSense. The former is dedicated solely to sound, and you can choose between different presets. Those presets are also available in the all-encompassing PredatorSense (see the Software and Warranty section below), and the two pieces of software do change each other, so you can use whichever you prefer.

To get into the Predator, I had to remove 10 Torx screws (I used a Torx T6 driver) before I could pry the bottom casing open.

But once that was off, I noticed a black, tape-like material adhered to the motherboard. Only the Wi-Fi module, secured with a single Philips head screw, appeared immediately upgradeable. All other options are on the other side of the motherboard. If you want to make an upgrade, like bumping up to 32 GB of RAM, you’ll have to remove the motherboard from the chassis.

Gaming laptops rarely perform well on our battery test, but at least the Predator scored slightly higher than average (though that isn’t an extraordinary bar to clear). On our test, in which laptops continuously browse the web, stream video and run OpenGL benchmarks, the Predator ran for 4 hours and 24 minutes. The mainstream gaming average is 4:18.

Unsurprisingly, this thing gaming notebook got hot under the collar when put to use.

The 720p webcam on the Predator is, like many other laptop webcams, disappointing. It was color accurate, capturing my blue eyes and gray sweatshirt correctly, but small details like my beard weren’t sharp, and it had particularly bad issues with windows behind me.

Unfortunately, as per usual on Acer’s machine, the Predator is weighed down with a bunch of extra junk. There is, however, one useful utility.

But besides all of the usual bloat that comes with Windows 10 (Plex, Candy Crush Saga, Royal Revolt 2: Tower Defense, Township, Phototastic Collage and FitBit Coach, among others), Acer has piled on more. That includes Netflix, PhotoDirector, PowerDirector, Firefox, Norton Security Scan and a prominent link on the desktop that takes you straight to Amazon’s home page in the browser, affiliate tag and all.

Acer sells the Predator Triton 500 with a 2-year warranty.

The Acer Predator Triton is a testament to the company’s improving design. It’s a slim machine packing Nvidia’s RTX graphics and a bright, vivid display. For this price there shouldn’t be so much bloatware, though, and competitors have slightly higher productivity benchmark scores.

RTX laptops have proven to be expensive so far, so you can’t make much of a jump without spending significantly more money. If you have some extra cash, you can opt for an RTX 2070 Max-Q-based machine like the Lenovo Legion Y740, which we reviewed at $1,920 (£1,999.99). That’s larger and heavier but with better performance all around.

But if you want enough specs to get you gaming in a thin laptop that can slip into a bag and has some good looks, too, the Triton 500 is up your alley.

Want to comment on this review? Let us know what you think in the Tom's Hardware Forums.