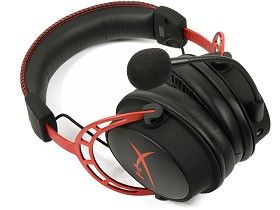 Although we don't expect perfection from a $100 gaming headset, the HyperX Cloud Alpha's sound quality comes close. Moreover, Kingston uses reasonably high-quality materials put together in a solid way. Our award is well-deserved.

Kingston HyperX Cloud Alpha is intended to round out the company's portfolio with a higher-end headset offering priced at $100. Similar to Logitech's G Pro, this headset employs something called dual-chamber technology. In short, it places the drivers responsible for generating sound in their own chambers, purportedly separating high and low frequencies for better tuning of the output. The design isn't revolutionary, nor is it a requisite for great acoustic performance. But the HyperX Cloud Alpha is one of the best gaming headsets we've tested, not only for its sound quality but also Kingston's durable construction and comfortable fit.

Inside the box, you'll find the headset, a clip-on microphone, a 1.32m-long cable with an inline control unit and headphone/mic jacks, along with a 2m-long extension cable that serves as a splitter for the separate 3.5mm jack plugs. The cable is covered in a braided textile and is relatively soft.

Any of the pieces you don't use can be stored in an included carrying bag with the brief instruction sheet.

The headset is visually striking thanks to its red metal band, matte black ear cup shells, and anthracite-colored highlights with the red HyperX logo. Everything blends together nicely. Moreover, we're glad to see Kingston dispensing with gaudy extras and distracting LEDs.

The company's build and material quality are quite good, surpassing Roccat's recently-reviewed Khan Pro in that regard.

Weighing almost 300 grams without its cable, this isn't an ultra-light headset. But it's not obnoxiously heavy, either.

Headband adjustments are easy to achieve by pulling out and pushing in, with a tactile response accompanying the individual steps. You'll have no trouble dialing in a comfortable fit, regardless of whether your head is large or small.

The hinge mechanism is mounted on only one axis, so the headband's flexibility must ensure the necessary vertical adjustment. This actually works quite well in practice. Of course, you could argue that another hinge would be better, similar to Roccat's Khan Pro. But there's also one less part to potentially break. So you're no worse off with a metal bracket than a hinged plastic headband.

The removable ear pads are made from the same material. They're comfortable enough for long-term use, too. A quilted seam on the outer edge prevents wrinkles from forming, so the cushions stay neatly sealed. Similarly, the inner covering is wrinkle-free and thin enough to not affect the sound. These are small details that not every manufacturer pays attention to.

The HyperX Cloud Alpha is a wired headset, so there's a control unit built into Kingston's cable with a volume wheel and a slide switch to mute the microphone. The wheel is easy to reach and manipulate, but the mute switch takes some getting used to.

Similar to the mic, this headset's cables are completely removable. Its plugs fit very tightly, so you'll have to use a lot of force to seat them completely. Just listen for them to snap into place audibly.

A number of other headset vendors already utilize a similar double-chamber concept, so what makes the HyperX Cloud Alpha special? Kingston does make some unique modifications. On the top edge of the ear cups, there are some small openings that we first guessed were for pressure equalization. However, the system inside is more sophisticated than that. Unscrewing the cups gives us a better look inside.

Peering in, we see that the chamber responsible for tuning bass also has a specially-shaped opening. Experiments with this opening tell us that masking over it almost completely eliminates low-frequency response. The outer openings also influence low bass and its character in an obvious way.

High frequencies from the 50mm neodymium drivers are radiated directly to your ear from the cone. Meanwhile, a rear opening below the drivers is mainly used to shape the lower mids and mid-range, giving those frequencies a warm sound.

A bit of experimentation with damping the shell's large cavity makes the headset sound "colder," which certainly won't appeal to everyone.

The appeal of 65-ohm impedance is determined on an individual basis. When it comes to most mobile devices, manufacturers prefer 32 or 16 ohms to increase achievable volume levels. With that said, listening to this headset through Google's Pixel 2 XL at maximum volume for long enough can still damage your hearing.

Kingston's flexible gooseneck microphone is long enough for our tastes, and it holds whatever position you bend it into fairly well. A tight connection to the headset should prevent the mic from slipping out during use. Moreover, pop protection helps lessen the effect of fast-moving air over the element.

We start with a measurement of the microphone's frequency range. For this test, we use a calibrated mic (for reference) in our purpose-built measuring room. This allows us to take comparative measurements and generate a curve that comes close enough for what we're trying to do (even if it isn't the most ideal method for testing this mic). So, while the limitations of our equipment don't allow us to calculate the microphone's exact frequency response, we do have a reasonable approximation to confirm our subjective impression.

According to our equipment (and ears), the levels drop off sharply below ~100 Hz. Raising the lower mids and upper bass makes voices sound more warm and full. And a difference of over 20 dB from 1 kHz to ~8 kHz modulates the dominant highs, which sometimes sound metallic in the upper range. This is certainly not to everyone's taste, falling short of a good table microphone's quality. Still, the mic level is stable enough.

The curve looks really good except for a small dent at ~4.25 kHz and a peak at ~6 kHz. There is no better way to tune the sound, though, and we can see that this isn't a bass-heavy boombox. Rather, the HyperX Cloud Alpha is a neutral and deliberately-tuned headset. It is also reminiscent of the older Creative Sound BlasterX H5, but armed with a better bass foundation. Although you can't expect high-end headphones for $100, the Cloud Alpha comes close.

We did toy around with the lowest bass levels, raising them at 64 and 32 Hz. However, the level stability and transparency were somewhat lost. Don't bother.

Now let's subjectively test Kingston's tuning efforts. We began by running the headset for two days straight at a source with decent sound levels to make sure it is properly broken in.

The bass is deep, soft, and more reserved than on many competing headsets. But it's always present enough for our taste. The contra octave is also audible, though it won't shake your body. If you like to feel your music more than hear it, put some time into adjusting the equalizer or look elsewhere.

Upper bass, up to 150 Hz, contains the male voice's fundamental speech frequency. Thus, it has a strong influence on the lifelike reproduction of male vocals.

This range sounds coherent and natural. Male vocals are reproduced rather warmly, and instruments remain largely unaltered. All in all, the resolution is still good, allowing single sources to perform acceptably.

The lower mid-range (sometimes called "fundamental range") spans from ~150 to 400 Hz. Together with the upper bass, this range plays an important role in producing the subjectively perceived warmth and fullness of sound. This is also where the fundamental range of female vocals can be found.

Female vocals sound good. The timbre of recorded instruments can also be described as warm across this range. We like these results because even small arrangements of classical instruments fill the sound stage. The HyperX Cloud Alpha's performance makes you want to relax in front of a fireplace on a winter evening, which we weren't expecting from a $100 headset.

The upper mid-range, from 400 Hz to about 2 kHz, contains the 1 kHz point that's used as a reference for many measurements. Unfortunately, this is often very noticeable, especially with cheaper devices, as manufacturers tend to overemphasize it a bit. This frequency range also plays a significant role in gaming, and its balanced reproduction contributes significantly to good spatial resolution.

All instruments offer the nuances we want to hear, and the resolution is also good for this price range. Detailed playback ensures a convincing performance. And again, a well-organized sound stage is satisfying to listen to. However, some headsets and good hi-fi headphones simply offer more (though that's just us nitpicking).

Subjectively, instruments in the orchestra sound like they're positioned far enough apart from each other. That means Kingston's HyperX Cloud Alpha can play music really well. Gaming is no challenge at all in comparison.

Between 2 kHz and 3.5 kHz is where the human ear is most sensitive, especially since the lower levels of this range are responsible for the human voice's overtone reproduction. This frequency range is crucial to the recognition of a voice or an instrument. Thus, in this context, it also relates to the respective tone color, or timbre.

The Cloud Alpha sounds natural and relatively neutral. Placing the source of sounds is incredibly important in games, and Kingston's latest does this well. Although we've tested models that fare even better, there are also worse options selling at similar prices. Musical reproduction remains solid, though some vocals lose a bit of expressiveness. But even then, this headset is still far above average.

The mid-high range (3.5 to 6 kHz) determines the success or failure of speech reproduction as a whole, since sibilant sounds (like the letter "s" and hiss sounds) fall into it. The upper trebles range up to about 10 kHz, where we pass into the territory of super-high frequencies.

The small dent observed in our frequency analysis continues at the lower end of this range. And as the frequency rises, it becomes a peak. Anyone familiar with the so-called "Beyer peak" characteristic of some Beyerdynamic headphones knows what we're talking about.

Some sibilants sound more dominant than we'd like, and corresponding instruments push into the foreground too much. Over-emphasized blow-out noises are decidedly not the lesser of two evils. This is a unique interpretation that you'll either like or not. Fortunately, it doesn't ruin the headset's otherwise-good overall performance.

While a $100 price point is higher than most gamers want to spend on a headset, it's not prohibitively expensive. We do, however, expect a lot from a premium gaming headset when it comes to materials, build quality, and acoustic performance.

Those disciplines are where Kingston's HyperX Cloud Alpha scores big, though. The company doesn't rely on cheap plastics, but rather uses aluminum in several areas. The plastic composing the shells is solid, while the ear pads and headband are soft, but not wobbly.

As far as sound goes, this is a bulls-eye for anyone interested in the most natural reproduction possible (instead of amplified bass and exaggerated highs). The double-chamber technology does work. But it's not revolutionary. Think of the feature as an evolution of existing solutions.

From this point of view, our award is well-deserved. While the HyperX Cloud Alpha could surely be better, higher costs would quickly exclude gamers on a budget. Kingston ends up striking a balance we're willing to accept.