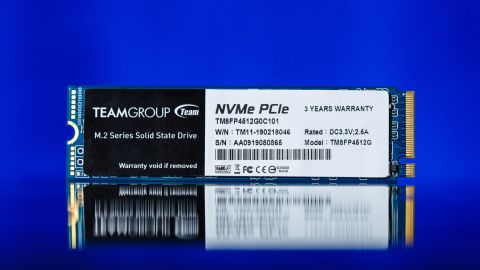 We'll be comparing the Team Group MP34 against some popular competition. Rocking the same Phison E12 controller as Team Group's drive, we have results from the MyDigitalSSD’s BPX Pro and Gigabyte Aorus RGB. With their own in-house built NVMe controllers, the Samsung 970 EVO Plus and WD’s newly revised Black SN750 represent their respective companies’ latest and top-end products to date. Additionally, we’ve included the SMI SM2262-powered Intel 760p and the Adata XPG SX8200 Pro, the latter of which which features the updated SM2262EN controller. The Crucial P1 features an SMI SM2263 controller and QLC NAND. Finally, we’ve thrown in results from a Samsung 860 EVO to show any advantages these NVMe SSDs have over their SATA-based SSD siblings.

Team Group's MP34 does very good in PCMark 8. With an overall score of 5,101 points and an average bandwidth of 693MB/s, it lands in third place. It even bested Samsung’s 970 EVO Plus by a hair. The MyDigitalSSD BPX Pro was able to edge out with a single point more in score, thanks to its extra over-provisioning, which helps to deliver consistent performance with heavier workloads. But, as we can see, even without overprovisioning, the Team Group MP34 is impressive.

Like the performance in PCMark 8, the MP34 did well in our game load test. It is light-years ahead of any HDD with a total time of 22.33 seconds vs over 36 seconds. The Team Group drive is competitive with other options out there, but overall the difference between one SSD to another, even something of the SATA flavor like Samsung’s 860 EVO, isn’t much.

We use the DiskBench storage benchmarking tool to test file transfer performance with our own custom 50GB block of data. Our data set includes 31,227 files of various types, like photos, PDFs, and videos. We copy the files to a new folder and then follow up with a read test of a newly-written 6 GB file.

When it comes to file transfer performance, nothing can beat the Intel Optane SSD 905p, but some can come close. The MP34 performed fairly average in our 50GB file copy test. Overall, it ranks in 6th place and bested the Aorus RGB, but was outperformed by the ADATA SX8200 Pro, BPX Pro, Samsung 970 EVO Plus, and even the Crucial P1. In read performance, it did a bit better. It came in close second, just behind the Samsung 970 EVO Plus to read our 6GB test file, and outscored the other E12 based options.

Team Group’s MP34 installed SYSmark 2014 SE without a hitch. It came in fourth place, tying the Aorus RGB, and was only two seconds slower than the Intel 905p. After we put it to the test, it returned a fantastic responsiveness score of 1716 points, which was almost on par with the Intel 760p and Samsung 970 EVO Plus yet again.

In ATTO, the MP34 delivers essentially the same performance as any other E12 based SSD, up to 3.5/2.1GBps read/write.  This outperforms the Crucial P1 and Intel 760p, but the ADATA XPG SX8200 Pro beats it slightly in writes and Samsung’s 970 EVO Plus comes out triumphant with its monster read and write performance.

As we saw in ATTO, the MP34 is able to deliver essentially 3.5/2.1GBps read/write speeds. This is at an unrealistically high queue depth of 32, but at a more realistic QD of 1, it does very well too; about 2.1/2.0GBps read/write.

The MP34 would be an odd drive out if it didn’t feature an SLC write cache to help boost write performance. In our testing, it was able to absorb about 12-14GB of data before slowing down from 2.1GBps to an average of 675MB/s. While this is great and ranks it third overall in write performance, the BPX Pro’s SLC cache bests it by giving users an extra 12GB before it slows down.

Power consumption is well regulated. Just one thing stands out: During our 50GB file transfer, the drive consumed about the same amount of power as the other E12 based SSDs, but hit a slightly higher maximum. This is probably due to the 1.35v DDR3L DRAM cache rather than the 1.2V DDR4 DRAM cache the others have. Luckily, this didn’t impact its efficiency score, where it averaged 90MBps per watt. As well, at idle it consumes ~0.4W when ASPM is disabled and about 53 milliwatts when it is enabled.