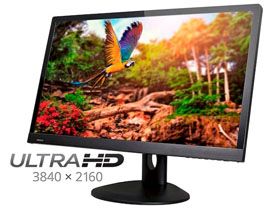 Monoprice does its business via mail-order, so the company makes an effort to provide safe and secure packaging. The CrystalPro 4K comes double-boxed just like the 30-inch IPS LED we reviewed recently, with spongy vibration-absorbing foam inside to keep the contents from moving around. You’d have to try pretty hard to damage this one.

The easiest connection method is DisplayPort, though that particular cable is not included. You do get a heavy-gauge DVI cable and a stereo audio interconnect. There is also an external power brick that accepts an IEC-type power cord.

We were impressed with the solid construction of Monoprice’s 30-inch IPS LED, and it continues that trend with the CrystalPro 4K. The panel has an aluminum bezel, while the rest of the chassis is made from hard plastic. The base attaches to the upright with a captive bolt but you’ll need to break out a Phillips-head screwdriver to attach the stand.

Our favorite part is the all-glass front panel layer. Rather than the textured anti-glare plastic used on a majority of displays, coated glass provides a noticeably clearer image. It’s true that there are more reflections to deal with. But once you place it properly, this monitor’s clarity and depth are hard to beat. In fact, the only other screen in its class for sharpness is Planar's PXL2790MW. Just don’t place the CrystalPro facing a sunny window and you’ll be fine.

OSD controls are underneath the bottom-right edge and consist of buttons that require a firm click. They are clearly labeled on the front with large white lettering. While we prefer the joysticks we've seen on some displays, Monoprice provides excellent traditional keys.

Samsung’s and Planar’s Ultra HD screens cut costs by deleting the fully-adjustable stand. Monoprice doesn't go this route, however. Its stand provides full tilt, height, swivel and portrait movements, presenting just the right amount of resistance and little wobble. The panel stays where you set it.

The CrystalPro is of average slimness, which means around two inches when you factor in its power bulge. The back is perfectly flat, making it easy to utilize the 100mm VESA mount if you choose to.

The vent line across the top does a good job of carrying heat away from the CrystalPro’s innards. In our testing, the monitor never ran too hot, even after hours of being powered on. At the bottom of the upright you can see a hole for cable management.

Most monitors only include one HDMI port with MHL. But both jacks on the CrystalPro will charge your phone or tablet. You also get two DisplayPort inputs and a dual-link DVI connector. To get 60Hz operation at 3840x2160, you must use DisplayPort, along with a version 1.2-compliant video card. Rounding out the input panel is a single analog audio input and a DC jack for the external power brick. In the above photo, you can also see the speaker grills to either side. At only two watts apiece, there’s not much in the way of volume or frequency range available.