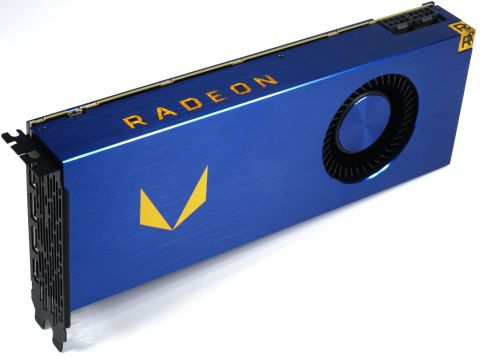 AMD's Radeon Vega Frontier Edition performs well in targeted professional applications thanks to support for Radeon Pro certified drivers. However, it isn't as fast as many prosumers might have hoped in games. While it's possible that a forthcoming software update improves performance, the already-announced Radeon RX Vega 64 should be comparable (and less expensive) for gaming-only.

AMD’s goal with its Radeon Vega Frontier Edition seems clear: try to do everything well. Nvidia has to segment its portfolio carefully; it doesn't want to cannibalize sales of the Quadro P6000 with Titan Xp. But AMD doesn't have that problem. Radeon RX Vega 64 isn't here yet, so pros and gamers alike are putting the Frontier Edition board through its paces.

The company even encourages this by allowing the Radeon Vega Frontier Edition card to use AMD's Radeon Pro certified drivers, without which many workstation-class applications won't even start. The same can’t be said for Nvidia’s Titan Xp. No matter if you’re a prosumer who dabbles in high-end hardware for work and play, or a scientist eager to access lots of floating-point compute performance, this card is supposed to be a jack-of-all-trades.

Because we're still waiting for the Vega card meant to address gamers, we're not going to focus on that market exclusively (although we do have gaming benchmarks to show as well). Instead, you'll see us mix it up with workstation-class comparisons and high-end desktop cards. Included in the mix is Nvidia's Quadro P6000, which is around three times more expensive than AMD's Frontier Edition board.

AMD's Radeon Vega FE weighs in at a solid 1050g. Its length, from the slot bracket's edge to the end of the cooler, is 26.8cm. Its height, from the bottom of the PCIe slot to the cooler's top, is 10.5cm. A depth of 3.5cm makes this a true dual-slot card, with the backplate needing another 0.4cm of clearance on the other side.

Both the card’s cover and backplate are made of blue anodized aluminum that has a high-quality feel to it. All of the screws are painted black. A Radeon logo printed on the cover and the logo cube provide the only splashes of dissimilar color. This follows the theme of AMD's other Pro WX cards, though Vega FE's blue is noticeably darker and more saturated.

The card's top sports a pair of eight-pin auxiliary power connectors, as well as the aforementioned Radeon logo cube that lights up yellow. It's made from acrylic and recessed into the card’s cover.

The Radeon Vega FE's end is closed. It sports mounting holes, which are fairly standard for workstation-oriented graphics cards. Around front, the matte black anodized slot cover hosts three DisplayPort connectors and one HDMI 2.0 output. The omission of DVI connectivity makes sense from an airflow perspective; the slot cover also serves as the card's exhaust vent and needs to be as free-flowing as possible.

We introduced our new test system and methodology in How We Test Graphics Cards. If you'd like more detail about our general approach, check that piece out. Note that, in order to avoid any potential CPU bottlenecks when testing AMD's powerful graphics card, we've upgraded our CPU and its cooling solution in the meantime.