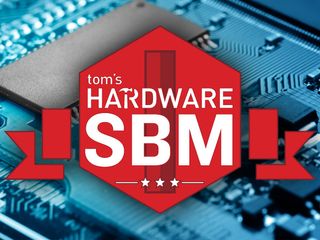 Overclocking Haswell On The Cheap

If you are new to our System Builder Marathon series, take a quick look at last quarter's introduction. In it, we give you a refresher course on what we're trying to achieve here, as well as explaining our newly revamped pricing structure. To summarize, we now budget for the performance-oriented parts, giving Thomas, Don, and I a bit more freedom when it comes to the subjective choices like cases and optical drives. Of course, those costs remain transparent also, in addition to a final tally that now includes the Windows operating system.

Once again, I'm getting the same $450 to spend on performance, and the direction I chose for this low-cost gaming box could not have been any simpler. Last quarter’s configuration was built and tested before Intel launched its Pentium G3258. Overclocked dual-core Pentium processors once dominated in value during our System Builder Marathon stories. But as Intel locked its inexpensive parts down at low frequencies, and our workloads became more threading-optimized, performance started falling short. But now I can exploit the G3258’s unlocked multiplier to compete more aggressively against the AMD Trinity-based platform I've used before.

This new CPU sparked talks amongst the team that we should do an overclocking theme this quarter, shooting for maximum clock rates. The idea sounded fun. But what would I have to give up in the process? To compete, I’d need a Z-series motherboard and an aftermarket cooler. And then it'd all come down to luck of the draw, since not all chips have the same amount of headroom. As Chris Angelini demonstrated in The Pentium G3258 Cheap Overclocking Experiment, I could start in the basement with a $45 motherboard and Intel's bundled heat sink, potentially hitting 4.4 GHz or beyond with a decent sample. But even if I could bolster clock rates by 1000 MHz for free, does it really make sense to tack on another $80 just to eke out 200 or 300 MHz more? I’m building a gaming PC on a budget in a series that champions maximum value. So I set my sights elsewhere. AMD's Radeon R9 270 graphics dropped $20 since our last round of purchases. How could I step down to a sub-$100 graphics card? Unless I got far luckier than the other guys, I’d have to bow out of the clock rate race and instead shoot for maximum overclocked system value.

To take a different approach than Chris already highlighted, I wanted to go with ASRock's H81M-HDS. It too supports unofficial, non-Z-series overclocking of Intel's Pentium G3258, but benefits from a slightly beefier power phase and the addition of a USB 3.0 front-panel header. However, outfitting 8 GB of DDR3 memory would set me back $8 more this quarter, and I could only make up $3 with a well-priced power supply. The Pentium G3258 itself saved $10 compared to last quarter’s Athlon X4 750K, so I came up about $12 shy of making this a reality. Instead, the cheap MSI H81M-P33 was just my ticket for augmenting the Pentium's clock rates, while still securing beefier graphics for 1080p gaming.

My build sat in Newegg's shopping cart just a few cents under the $450 budget. However, like last quarter, I just couldn’t pass up doubling my storage capacity for $5 extra. A 1 TB drive isn’t going to give you a performance boost, and when it's all said and done, we give these systems away at the end of the Marathon to someone who will use them.

I completed the build with a DVD burner and Rosewill’s Challenger gaming case. Its trio of bundled fans could almost be considered an exploit of our new pricing structure, given the current overclocking theme. However, last quarter’s build also came with three fans, and our final build of materials was only $3.50 more. Plus, back when we ordered, bargain hunters could have capitalized on the three $10 rebates accompanying the parts I picked.