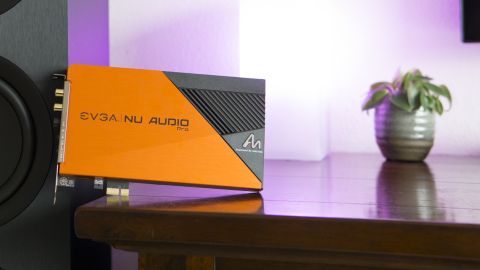 The EVGA Nu Audio Pro is an excellent sound card but is best used with a high-end audio system. You’ll need expensive equipment to notice the most impactful difference.

With the rise of high-quality audio hardware on most motherboards over the last decade, there has been very little demand for dedicated audio hardware. But recently we’ve noticed a few manufacturers bringing dedicated sound cards back, and there are even some new players on the market. HiFi is making a return to the desktop PC space, in part because a growing group of people are adamant that onboard audio is still not good enough. In some ways -- or at least some situations --  I agree. So when EVGA, a company primarily known for graphics cards and power supplies, announced its second Nu Audio sound card, the Nu Audio Pro ($300 at the time of writing), it was time to take one for a spin, see what it can do for your PC’s audio output and figure out who -- if anyone --  should invest in a dedicated sound card in 2020.

If you’re buying a new motherboard for your PC today, chances are that it comes with onboard audio that’s at least pretty good. If it’s a higher-end board, it likely has audio circuitry that’s isolated from the rest of the mainboard, has Japanese capacitors, a very high signal-to-noise ratio, a headphone amplifier that can drive headphones with up to 600 Ohm impedances and a collection of invented branding terms in an attempt to convince you that this specific motherboard has all the audio hardware you’ll need. Marketing fluff aside, that mid-to-high-end board probably does have all the audio hardware required for good sound output.

The touted120 dB SNR is an impressive figure, and only marginally lower than the EVGA Nu Audio ($150 at the time of writing), which touts an SNR of 123dB. You can sometimes notice the difference between those two numbers. The ‘signal’ is the sound you’re meant to hear, with the ‘noise’ being unintentional noise made by the hardware, such as hissing, electrical interference, white noise or buzzing. If you’ve ever turned your speaker’s volume knob up all the way without any music playing, you’ll know what I’m talking about. At the aforementioned high SNR ratios, these ‘bad’ noises should be so silent that they’re essentially inaudible at normal listening levels

The problem, however, is that motherboard vendors measure their SNR figures under optimal conditions that are nothing like the way you’ll actually use the motherboard. There’s no graphics card or unnecessary components installed, as many features as possible are turned off, they use a power supply with the cleanest power delivery -- you get the picture. As soon as you use that motherboard in a real-life scenario you can suddenly introduce heaps of electrical interference to the system, which can slaughter the SNR figure. Put your graphics card under load by firing up a game and you’ll really be giving your onboard audio some grief. Think about it: The inside of your PC, electrically, is a very busy place which can cause audible interference.

The Cleanliness of the Signal

However, the Gigabyte motherboard used does a good job at keeping the signal clean, and when using it I’m hard-pressed to hear any noise through my headphones. I can turn the volume up all the way and get some noise out of them for sure, but that’s at volume levels that would make my ears bleed the moment I hit play.

Your experience may vary, and the SNR is as much a function of the codec, in our motherboard’s case the Realtek ALC1220. as it is of the motherboard vendor’s implementation and the components used around it, and there are lots of complaints on various forums about users having issues with different motherboards using the same codec. On an aging Lenovo T440s notebook, I’ve often found that any load on the system will create audible noise. There’s even a specific noise associated with scrolling in a web browser.

A sound card like EVGA’s Nu Audio Pro takes the audio circuitry physically off the motherboard and shields it in a metal casing that’s effectively a faraday cage. The card also comes with its own power circuitry to clean up the power delivery to the digital-to-analog converter (DAC, which I’ll touch on shortly) and headphone amplifier.

What About Signal Quality?

The second problem with onboard audio is the quality of the signal. Even under ideal circumstances with a very clean signal, the quality or accuracy of the signal is dependent on the DAC. In most onboard audio solutions, there is some variation of a Realtek DAC, and our Aorus AX370 Gaming 5 uses the Realtek ALC1220, which is a very popular that’s used in lots of motherboards by many companies.

While the implementation on the Gigabyte motherboard keeps the signal pretty clean, there is better quality to be here. While this chip’s sound quality is much higher than it used to be for onboard audio, once you’ve heard audio from a high-quality source through a dedicated DAC for an extended period of time, you’ll realize that the ALC1220 just doesn’t bring music to life the same way. The highs don’t sound as crisp or clear, vocals lack a certain depth and realism, and bass can sound a little muddy. In contrast, a great DAC can bring out detail in music you hadn’t heard before, while the detail you could hear can present with further refinement.

To fix both these issues, you’ll have to use a higher-quality DAC or multiple DACs where applicable, a better headphone amplifier, use power circuitry that cleans up the provided power and shield the whole lot from external electrical interference. Of course, that’s no easy task to do on a motherboard, which is where the Nu Audio Pro sound card comes in.