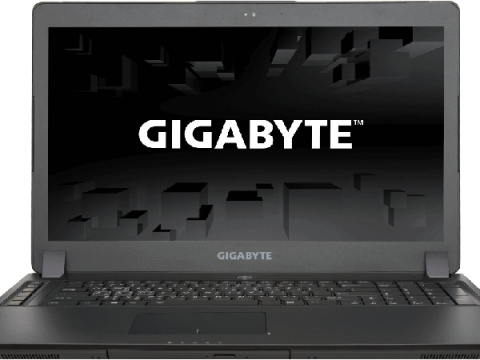 Besides the grilles and vents on the laptop's shell, Gigabyte's cooling solution consists of a large heat sink that spans nearly the entire length of the chassis making contact with the Core i7-5700HQ and GTX 980M. Heat is expelled from two back vents, pushed by fans at each end of the heat pipes where the cooling fins are attached.

Intel’s Core i7-5700HQ is a quad-core Broadwell-based CPU with Hyper-Threading support and a 6MB last-level cache. Its base clock rate is 2.7GHz, though that accelerates up to 3.5GHz through Turbo Boost. The company’s HD Graphics 5600 engine has a base frequency of 300MHz and a maximum dynamic clock rate of 1.05GHz, though we’re pretty sure you’ll want to use the discrete GPU instead.

Included in our test sample were two 8GB modules of DDR3L-1600 Transcend memory. There are two SO-DIMM slots available, so if you bought a lower-end model, you can upgrade the memory later. Just keep in mind that the most the P37X supports is 16GB.

The P37X v4 features a hot-swappable storage bay that lets you easily switch between the included optical disc drive and a 9.5mm SSD mount. This should come in useful if you’d like to re-image the laptop's hard drive with an existing Windows installation on an SSD while enjoying the convenience of an optical drive for the rare times you need to use a disc. Gamers with large libraries will find using an SSD much easier than downloading their entire library again.

Along with the hot-swappable storage bay, Gigabyte’s P37X v4 supports up to three more storage drives through two mSATA slots and one 2.5-inch HDD slot. The mSATA slots are compatible with SSDs up to 512GB, and the hard drive bay is specified for up to 1TB 7200 RPM disks or 2TB 5400 RPM drives.

Powering the P37X v4 is a 75.81Wh, 11.1V Li-polymer battery, which, in our home and creative battery tests was capable of 2.33 hours of operation and 2.66 hours in the work test. This is impressive, considering the hardware inside and the large display. Don't expect the battery to last through an entire day of work, though.

Underneath the two front grilles are a pair of 1.5W speakers. These drivers are advertised as Dolby Digital Plus, which should mean surround sound, but there are only two of them and they face downward. You're better off with your own speaker or headset.

Finally, Gigabyte tops its P37X v4 with a 17.3 inch 1920x1080 matte IPS display. As expected from an IPS panel, the display is just as crisp from outside angles as it is head-on. The matte coating helps if you game in an environment with multiple light sources.

Prev Page Specifications And Exterior Next Page Synthetics, Gaming And Applications
14 Comments Comment from the forums