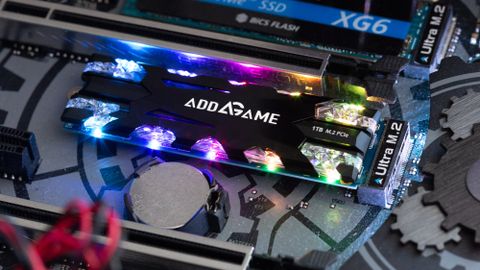 We put the X70 RGB up against a bunch of different SSDs to get a feel for how it’s performance stacks up. We include a direct competitor, the Adata XPG Spectrix S40G, that comes with a Realtek RTS5762 NVMe controller and RGB lighting, and Adata’s XPG SX8200 Pro enters as a very responsive competitor with its overclocked SM2262EN NVMe controller. We also threw in some other high-end options including Samsung’s 970 EVO Plus, WD’s Black SN750, Seagate’s FireCuda 510, and FireCuda 520. We also include a few value-centric drives, like the WD Blue SN550, Crucial MX500, and a WD Black 7,200-RPM HDD.

Final Fantasy XIV Stormbringer is a free real-world game benchmark that easily and accurately compares game load times without the inaccuracy of using a stopwatch.

The Silicon Motion-powered Adata XPG SX8200 Pro takes the crown as the fastest game-loading SSD in the test pool thanks to its overclocked controller, but addlink’s X70 RGB is no slouch, either. With a total game load time that nearly matches the Seagate FireCuda 510 and beats the Realtek powered Adata XPG Spectrix S40G while loading up five different game scenes, it should prove to be a responsive drive for gamers.

We use the DiskBench storage benchmarking tool to test file transfer performance with our own custom block of data. Our 50GB data set includes 31,227 files of various types, like pictures, PDFs, and videos. Our 100GB includes 22,579 files with 50GB of them being large movies. We copy the data sets to new folders and then follow-up with a reading test of a newly written 6.5GB zip file and 15GB movie file.

After hitting addlink’s X70 RGB with a few large file transfers, it landed in seventh place overall. While the Seagate FireCuda 510 features the same controller and NAND as the X70 RGB (but without the RGB lighting), the FireCuda 510 churned out a few more MBps here and there.

PCMark 10 is a trace-based benchmark that uses a wide-ranging set of real-world traces from popular applications and common tasks to measure the performance of storage devices. The quick benchmark is more relatable to those who use their PCs lightly, while the full benchmark relates more to power users. If you’re using the device as a secondary drive, the data test will be the most relevant.

addlink’s X70 RGB scores third place in both the Data and Quick System Drive benchmarks, demonstrating very fast responsiveness during most daily home and office use. When we hammered it with bigger file transfers in the Full System Drive benchmark, however, the drive fell into sixth place, landing between the WD Black SN750 and Seagate FireCuda 510. Relative to an HDD’s performance, it’s about 11x more responsive.

The Seagate FireCuda outpaces addlink’s X70 RGB by a few points, but both completed the prosumer-oriented benchmark in about a half an hour, which is almost twice as fast as the Adata XPG Spectrix S40G. The addlink X70 RGB lagged the FireCuda 510 due to reduced sequential read throughout in some of the tests, possibly tied to the RGB implementation. Still, it rivals WD’s NVMe offerings and destroys the Adata XPG Spectrix S40G.

In ATTO, we tested addlink’s X70 RGB at a QD (queue depth) of 1, representing most day-to-day file access at various block sizes. The addlink does quite well, delivering similar performance to that of other high-end SSDs as well as much faster small file read performance than the WD Black SN75. However, there is a slight reduction in throughput at the 512KB block size, a similar result as the Seagate FireCuda 510, the other Phison E12-based SSD. That implies the firmware could use further tuning.

While addlink’s X70 RGB not as fast as some of the competitors when writing a lot of data within a short timeframe, like the Seagate FireCuda 520 with its Phison E16 NVMe controller tuned with a large dynamic write cache, the X70 RGB surpasses them in the long run. The X70 RGB features a small static SLC write cache to absorb most bursty workloads. After writing 24GB at 3 GBps, write performance degrades to about 1,050 MBps. After a minute of idle time, the SSD’s cache recovers and is ready for more write activity at full speed. The Phison E12-powered X70 RGB and Seagate FireCuda 510 both outperform the competition at the 15-minute mark, except for WD’s Black SN750 and Samsung’s 970 EVO Plus. The non-RGB Seagate gets the upper hand on the X70 RGB, once again, writing an additional 33GB within the same time frame.

We use the Quarch HD Programmable Power Module to gain a deeper understanding of power characteristics. Idle power consumption is an important aspect to consider, especially if you're looking for a laptop upgrade. Some SSDs can consume watts of power at idle while better-suited ones sip just milliwatts. Average workload power consumption and max consumption are two other aspects of power consumption, but performance-per-watt is more important. A drive might consume more power during any given workload, but accomplishing a task faster allows the drive to drop into an idle state faster, which ultimately saves power.

With the onboard LEDs sucking away at power, the addlink X70 RGB isn’t the most efficient SSD. Measuring just under 4.3 watts on average during our file copy, the X70 RGB consumes about a watt more than the less-shiny Seagate FireCuda 510. At idle, at its lowest power state on the desktop, the X70 RGB consumed roughly the same power as the Adata Spectrix S40G. And, overall, addlink’s X70 RGB is much more power-efficient than a high-performance HDD.

After hammering the X70 RGB with a few hundred GBs in transfers with no airflow in a 23C room, the SSD’s controller reported a peak temperature of just 61 degrees Celsius, which is well within its operating range. Provided it has adequate ventilation, addlink’s X70 RGB should stay cool no matter what you do with it.