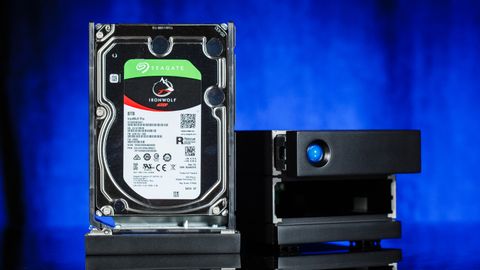 We configured and tested the 2big RAID in all operating modes and threw it against a few devices we have reviewed in the past. We included a few external SSDs for comparison. Our first two competitors are the 1TB G-Technology G-Drive mobile Pro SSD and 1TB Samsung X5, both are Thunderbolt 3 based SSDs. We threw in SanDisk’s 1TB Extreme Portable SSD, 480GB Kingston’s HyperX Savage EXO, and LaCie’s 1TB Rugged RAID Pro. These all come with a USB 3.1 Gen 2 interface.

When configured in a RAID 0 array, the 2big RAID hit its rated speeds of 440MB/s of sequential read/write throughput. As expected, it lags behind its flash-based competition but delivers a whole lot more usable space. When configured as RAID 1 or JBOD, performance halves and matches that of the LaCie Rugged RAID Pro, hitting ~230MB/s read/write. Performance is slightly better when in JBOD mode.

Like we saw in our review of the Rugged RAID Pro, CDM’s default sequential setting at a queue depth of 32 presented a slight “problem.” At QD32, the performance was over the rated 440MB/s read, but write speeds fell to 283MB/s. This improved to 384MB/s once we scaled back the queue depth to a more realistic value of 1. Again, both RAID 1 and JBOD results prove similar to one another at half the speed of RAID 0. This carries over to 4K random performance where we can see that compared to flash-based SSDs, this metric isn’t an HDD’s strong suit. 4K read/write performance comes in at up to 1/9 MB/s.

DiskBench is a storage benchmarking tool that allows us to test the transfer or copy performance of a storage device with real data. We test external drives with three file transfers that consist of 25GB of photos (10GB of iPhone jpg and 15GB of RAW photos from a Canon 6D), 50GB of movies, and 25GB of documents. First, we transfer each folder from a 1TB NVMe SSD to the external device; then we follow up by reading a 3.7GB 7-zip file and a 15GB movie back from the device.

The 2big RAID delivered respectable performance that crushes the Rugged RAID Pro. Transferring photos and our documents folder resulted in speeds of 236-245MB/s, while transferring 50GB of movies resulted in a transfer rate of 433MB/s, just beating the SanDisk Extreme 1TB. Read performance comes in at ~290MB/s for both our 3.7GB and 15GB file read tests. We can see that in RAID 0 the transfers are not quite as fast as some of the fastest SSDs, but performance is much better than that of an ordinary mobile external device.

Total scores range from 2,966 to 3,135 points and average bandwidth comes in at 14-16MB/s. These are high scores for a hard drive, but these “high” scores have nothing on flash. In PCMark 8, the rapid access times and fast small file transfer performance of flash enables the external SSDs to easily outperform the LaCie 2big RAID.