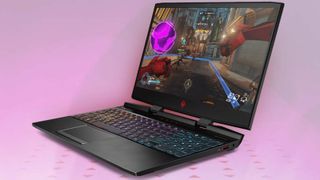 Want to get into gaming for budget prices? The HP Omen 15 Gaming Laptop has a 9th Gen Intel Core i5 and an Nvidia GeForce GTX 1650 in it, which won't play games at high settings but will get you started.

We haven't reviewed this particular model before, though we've typically liked HP's gaming fare under the Omen brand.

The GTX 1650 is enough to play most games on low or middling settings, especially esports like DOTA 2 and Overwatch.