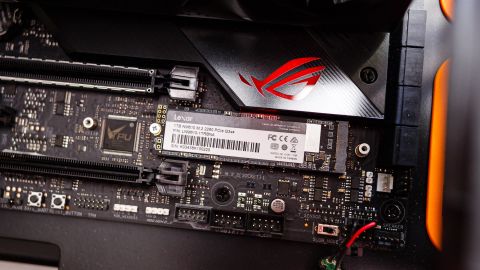 We compared Lexar’s NM610 to many popular competitors. At the high-end, we looked at Samsung’s 970 EVO Plus and WD’s Black SN750. As its main competition, we threw in the Mushkin Helix-L, Intel SSD 665P, WD Blue SN550, Patriot P300, and an Adata XPG SX600 Pro. Additionally, we added in the Crucial MX500 and WD Black HDD for good measure.

When it comes to loading up your game’s data, an SSD is a huge upgrade over any HDD. Lexar’s NM610 loaded up the multiple game scenes in Final Fantasy’s benchmark within half the time it took the HDD. DRAM-based competitors like the WD Blue SN550 and Intel SSD 665P both outrank the NM610, but overall, the NM610 scores quite closely to the high-end WD Black SN750.

Lexar’s NM610 isn’t an ideal candidate to use in your professional workflow, but it will keep up with some moderate file transfers. The NM610 scores fifth place in the copy tests. It didn’t do as well in the read tests, however. The Adata XPG SX6000 Pro and Patriot P300 moved up in rank and the NM610 fell into seventh place when reading back the large test files.

PCMark 10 is a trace-based benchmark that uses a wide-ranging set of real-world traces from popular applications and common tasks to measure the performance of storage devices. The quick benchmark is more relatable to those who use their PCs lightly, while the full benchmark relates more to power users. If you are using the device as a secondary drive, the data test will be of the most relevance.

Even without the use of local DRAM, Lexar’s NM610 is responsive. It scores fourth place in the Data and Quick System Drive benchmarks. The Full benchmark is the most taxing and because of that, the NM610 fell into fifth place with the WD Black SN750 overtaking it due to its incredibly consistent write performance.

Compared to an HDD, these SSDs are in a whole other league when it comes to speeding up your workflow. The higher performance SSDs rank the best of course, but the Lexar doesn’t do too badly. It outperforms the SATA SSD and scores significantly higher throughput when being hammered with mixed workloads.

In ATTO, we tested Lexar’s NM610 at a QD of 1, representing most day-to-day file access at various block sizes. Overall, it displays fairly good results. Speeds ramp up nicely as the file size increases along the same lines as the rest of the pack until it peaks at 1.8/1.6 GBps read/write.

iometer is an advanced and highly-configurable storage benchmarking tool that vendors often use to measure the performance of their devices.

Lexar delivers peak sequential performance of at 2.1/1.7 GBps read/write by a QD of 4.  Random performance looks to be pretty good too. At QD1, it ranks third fastest in responding to read requests and can dish out nearly 12K IOPS in our test bench, nearly matching the Samsung 970 EVO Plus. And, it managed to surpass its official peak random IOPS ratings by quite a bit.

When we wrote to Lexar’s NM610, it sustained a speed of about 1.7 GBps until the write cache filled. Once it did, it had written over 136GB of data. Beyond that, with very inconsistent results fluctuating from about 1 GBps down to 125 MBps, write speed averaged about 275 MBps. Additionally, when testing the unit without any airflow in our 25C lab, it did not exhibit any thermal throttling. S.M.A.R.T. data reported a peak of 64C after moving around 300GB of data.

Lexar’s NM610 is very power-efficient when copying files around, so much so that it earns a first-place finish here. It averaged similar power to that of the Crucial MX500 and its maximum consumption is much better restricted.

At idle, it consumes about half a watt, with APSM enabled or disabled while competitors like the Helix-L and Intel SSD 665p can both freely fall into lower power states when the feature is enabled.  Checking on the S.M.A.R.T. data, it becomes clear as to why. The Lexar NM610 doesn’t support lower power states at all as it comes with support for only one active state.