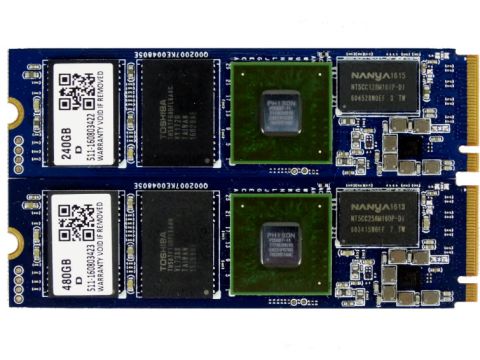 It turns out the Patriot Hellfire M.2 is not the product we originally thought it was. After some tuning, the application performance is up and this drive is ready to take on the emerging mainstream NVMe market.

It's difficult to explain how far NVMe has come over the last year. We are in the middle of a crossover from SATA to NVMe for the upgrade market, and some firms even predict NVMe will out-ship SATA in 2017. Premium NVMe products led the way, and now SSD manufacturers want to use a three-tier approach, just as they did with SATA over the last six years.

Intel has the entry-level NVMe market wrapped up with the low-cost 600p, but the mainstream market has more contenders. OCZ dropped the price of the RD400, and it now competes directly with the Hellfire M.2. The upcoming 960 EVO fits into the picture as well. It would be difficult for planar TLC to play in the NVMe arena. Some companies will make 600p clones, but products like the Adata SX8000 with IMFT 3D MLC will flood the mainstream market with low-cost SMI SM2260 controllers. The Patriot Hellfire M.2 is one of the few value SSDs available now, but it will be one of many very soon.

If you are looking for a better value, we suggest waiting a month for manufacturers to release more products. The intense competition will help to lower prices, which spurs sales.

We like the Patriot Hellfire M.2, but it's still not the well-rounded product we recommend that you buy. We really can't recommend a guaranteed winner yet. Both the Hellfire and OCZ RD400 deliver an exciting performance boost over SATA, but both also have weaknesses that we don't expect to find with Samsung's new NVMe line.

We've found that what you do with your SSD this year may not be what you do with it after an upgrade. We would like to see Phison correct the power consumption issues at some point. Your shiny new SSD today may become your hand-me-down notebook boot drive after the next upgrade. Pair this drive with a tired, year-old battery and your notebook may only have enough power to respond to an email or two before shutting down.

The lack of a proper E7 NVMe driver to take advantage of custom NVMe commands still has us perplexed. Even if Phison says the drive doesn't need it, and other manufacturers only get a 10% performance increase from a custom driver, it feels a little lacking to not put forth the effort. Like many Phison-based products, the underlying substance is there, but the finishing touches are missing.

If you are a gamer and just need a high-performance NVMe SSD to load your levels a little faster, the Patriot Hellfire fits the bill. Over time, you may get more firmware updates that increase performance further, but that isn't guaranteed. The drive is cheaper than the 950 Pro and Intel SSD 750 Series right now, but other competitive options are coming in the next 30 days.

Prev Page Comparisons And Benchmarks
27 Comments Comment from the forums