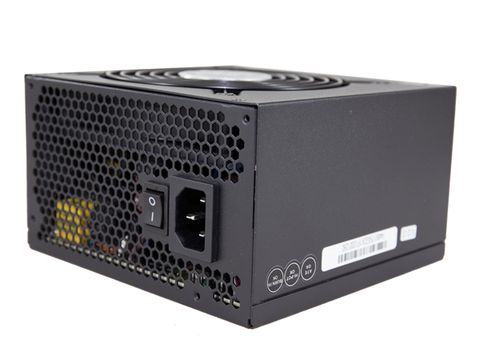 Before proceeding with this page, we strongly encourage you to a look at this article, which will provide you with valuable information about PSUs and their inner workings, allowing you to understand the information we're about to cover. Our main tools for disassembling PSUs are a Thermaltronics soldering and rework station and a Hakko 808 desoldering gun.

In this case, SilverStone broke ties with its favorite OEM, Enhance Electronics, and went to Sirfa for its second-gen ST75F-GS. While the first version used an Active Clamp Reset Forward (ACRF) topology, this one utilizes a half-bridge topology along with an LLC resonant converter for increased efficiency. This means that, on paper, the ST75F-GS V2's platform (Sirfa HPM) is inferior to the one used in the first version of this product. Our test equipment will be the final judge of that, though.

In the secondary side, Sirfa used a synchronous design for rectifying the +12V rail along with two DC-DC converters for generating the minor rails. In addition, all electrolytic capacitors are provided by Chemi-Con, while all polymer caps on the main PCB are by Teapo. On the modular board, we only ran across Chemi-Con polymer caps. Besides the sleeve bearing fan, another compromise in the build quality of this PSU is its single-layer PCB. Obviously Sirfa wanted to cut production costs. But it shouldn't have gone cheap on the fan selection, at least.

The first part of the transient filtering stage is on the AC receptacle and includes two Y and a single X cap. On the latter, we found a CMD02X IC that blocks current through the cap's bleeding resistor when AC voltage is connected to increase efficiency. The second part of the transient or EMI filter is on the main PCB and includes one X and two Y caps, two CM chokes and an MOV that's installed after the bridge rectifier. All in all, the EMI filter is complete.

The single bridge rectifier is bolted on a dedicated heat sink. Unfortunately, we couldn't identify it since its markings are on the hidden side.

In the APFC converter, two Infineon IPA50R140CP FETs are used along with a single CREE C3D08060A boost diode. The bulk capacitor is provided by Rubycon (400V, 560uF, 3000h @ 105 °C, MXG) and it has enough capacity to offer a pretty long hold-up time. We would, however, prefer a higher-voltage cap here, since 400V is close to APFC's DC bus voltage (380V). The APFC controller is installed onto the solder side of the main PCB and it is an Infineon ICE3PCS01 IC.

The main switchers are a couple of Infineon IPA50R140CP FETs arranged into a half-bridge topology. The LLC resonant controller is installed on a vertical daughterboard, and it is provided by Infineon (ICE2HS01G).

In the secondary side, a large heat sink holds six International Rectifier IRFB7437 FETs that are responsible for regulating the +12V rail. The same rail feeds two DC-DC converters, which generate the minor rails. The common PWM controller of the DC-DC converters is an ANPEC APW7159 IC, and on each VRM, four Infineon IPD060N03L G FETs are used.

Polymer caps from Teapo provide filtering on the main PCB and the DC-DC converters, along with several electrolytic Chemi-Con caps. We find some more polymer caps by Chemi-Con at the front side of the modular board, too. Sirfa's cap choices appear solid, although it didn't use only Japanese caps. Still, the Teapo polymer ones are of good enough quality. Moreover, in the front side of the modular board where airflow is restricted, Sirfa only used high-quality Chemi-Con polymer caps.

The standby PWM controller is an STR-A6069H IC that can provide up to 19.5W with universal voltage input (85V-265V) and an open frame design. It easily covers the 15W ceiling that SilverStone states for this PSU's 5VSB rail.

The protection IC, a SITI PS223, is installed onto the main PCB. It supports all of the basics, including Over-Temperature Protection (OTP).

The soldering looks good. It might not be up to Delta's or Flextronic's level, but it's definitely a step forward for Sirfa. We carefully examined the PCB and didn't find any incomplete joints or problematic leads.

Prev Page Packaging, Contents, Exterior And Cabling Next Page Load Regulation, Hold-Up Time And Inrush Current
1 Comment Comment from the forums
Be In the Know