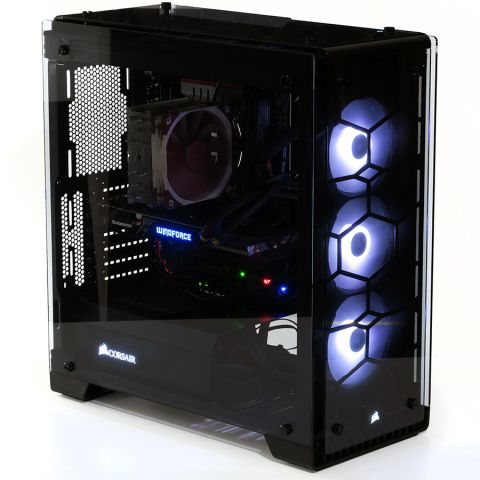 The Crystal 570X could be a good starting point for buyers who want the aesthetic of glass front and top panels, and don’t mind adding a few of their own fans. Performance enthusiasts willing to give up that extra glass may instead chose the Enthoo Evolv Tempered Glass.

Tempered glass panels are great for showing off internal components, and they are also good noise reflectors at the frequencies produced by most graphics card fans. Corsair’s glassiest example yet, the 570X uses thick 1/8” plate on the top and face, as well as on the sides. A sturdy steel structure holds everything together, and plastic filler sections provide visual continuity between the face and top, as well as the sides and feet.

Extra-light tint does a great job of reflecting lightly colored objects around the room, just to let people know how shiny the panels are. While some people would view this as a great way to show off dust, the glass actually collected less dust than the steel panels of some other cases we’ve tested. Static, or the lack thereof, appears to be the larger factor.

Front-panel ports and fan lighting controls are found adjacent to the top panel, near its front right corner. This placement would be ideal for those who put their case on the left, which was much more common when people actually put their cases on their desks (it left more space on the right side for mousing). Since reaching up some 20” from your keyboard to access USB ports isn’t exactly convenient, most Crystal 570X users are probably thinking of putting their case beside their desks. That’s somewhat of a shame, given the work Corsair put into making this design a display piece.

The Crystal 570X has only seven slots, which means it won’t work with a double-slot graphics card in the motherboard’s bottom slot. Above the expansion slots, an empty 120mm fan mount is slotted to allow sliding a rear-panel radiator into the most appropriate position for its fittings and end caps.

The right panel is made of the same lightly-tinted tempered glass as the left, and shows off the Crystal 570X’s two 3.5” and two 2.5” trays.

The fan lighting controller has the same buttons as those found on the top panel, with both panels letting you select between White/Red/Orange/Yellow/Green/Blue/Violet and alternating colors, as well as Static/Breathing/Flickering/Alternating light modes.

The light controller’s associated six-fan hub has openings for three additional fans. The 3.5” trays before it have silicon-damped drive locator pins, and are drilled to optionally hold 2.5” drives. The rearward 2.5” trays have a screw-free locking tab. All trays are individually secured via sliding tabs and a single thumb screw.

The Crystal 570X power supply shroud is riveted in place, requiring that power supplies be inserted through an opening on the opposite (right) side. Its lighted logo connects via a SATA-style power lead, and its short length does little to conceal extra cables and/or tucked away cable length. The gap does help users to reach cable plugs on the inside end of their modular power supplies, and provides ample space (5.4” behind the stock fans) for sandwiched radiator configuration.

Both the top panel and front panel filters are magnetic. Beneath and behind them, fans are mounted on removable panels to ease radiator installation. A mere 1.5” of space above the motherboard means that a top panel radiator and fan set will extend past the upper edge of the board. Users mounting 120mm fans beneath their radiator get approximately 1.7” of clearence for onboard components or DIMMs, and that space shrinks to around 0.7” when 140mm fans are placed there. Placing the radiator below the fan could reduce clearance even more, since some radiators are slightly wider than its fans. Because most motherboards now have the EPS12V connector within ½” of the motherboard’s top edge, even the slimmest of 2x 140mm liquid cooling configurations are excluded from the top panel in most builds. We recommend builders make use of all that glorious front-panel radiator space instead.

The front Corsair logo is molded into the dust filter and sits above its light.

Next Page Building, Testing, And Evaluation
60 Comments Comment from the forums
Be In the Know