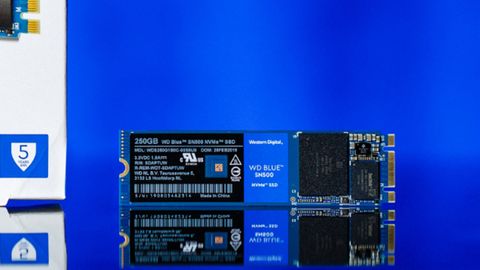 The WD Blue SN500 delivers NVMe-class performance at SATA prices. With a five-year warranty, an in-house designed controller and NAND that supports endurance ratings of up to 300TBW, you can buy the drive in confidence. We just wish WD offered higher capacities.

7/22/2019 Update: We've updated this article with new testing for the 500GB WD Blue SN500, as well as tweaked parts of the review to reflect current pricing.

WD’s latest NVMe SSD aims to complete the company's portfolio, but it also feels like the beginning of the end for SATA SSDs. Recently, WD dropped its all-new WD Blue SN500 to complement its WD Black SN750. Unlike the WD Black, which is designed for those looking for one of the best SSDs on the market, the Blue SN500 targets resellers, system builders, or just any consumer on a budget.

With speeds of up to 1.7/1.45 GBps read/write, it is up to three times faster than a SATA SSD and will give you the boost in performance you need at prices that won’t hurt your wallet.

M.2 NVMe SSDs are faster, smaller, and, at times, can be cheaper to manufacture. After all, they're basically just PCBs with components on them. They don’t need an external casing, nor an additional connector like SATA drives. But those aren’t the biggest burdens to the total cost of manufacturing an SSD; DRAM significantly increases the price for both M.2 and SATA SSDs.

DRAM comes in most modern SSDs, at least the better-performing ones, which is why the WD Blue SN500 is quite unique. It outperforms SATA SSDs and is quite competitive as an entry-level NVMe SSD, but eschews an expensive DRAM chip. It also doesn’t mooch off system resources like the NVMe Host Memory Buffer feature does, like in the case of the Toshiba OCZ RC100. Instead, WD decided to do something a little different.

WD recently invited us to its headquarters for a briefing on the WD Black line of SSDs, during which the company also demonstrated multiple proofs-of-concept SSDs. WD has conducted various testing to better characterize and understand client SSD workloads patterns and enable an optimum allocation of system resources in a more cost-efficient manner. Two of these tests consisted of studying how much DRAM and SLC cache an SSD needs for most PC workloads.

WD found that with better understanding data locality it could maintain 90-99% of the performance of an SSD with very little memory for caching the File Translation Layer that typically resides in DRAM. Instead of 512MB of DRAM, the company found that 4MB is enough for most applications. WD hasn't disclosed the official amount of memory onboard the SN500. The SSD doesn’t feature an external DRAM chip, but there is still a small amount of memory inside the controller that serves a similar purpose.

WD also tested to see how much SLC cache an SSD would truly need to meet real-world performance demands. After sifting through and investigating burst patterns in several real-user scenarios and common benchmarks in Windows 10 environments, the company concluded that bigger is better. But, just how much bigger is better? A paltry 320MB was sufficient 99.5% of the time, but 3.2GB was plenty 99.9% of the time. And guess what? 3.2GB matches the amount of SLC cache on the SN500 we are reviewing.

The 250GB SN500 comes with a 150TBW (terabytes written) endurance rating and offers 300TBW for the 500GB model. This is a modest increase over the WD Blue 3D SATA variants that are rated for up to 100TBW and 200TBW, respectively. The Blue also boasts a longer five-year warranty.

Sadly, while some things have improved, others have not. Unlike its SATA brethren, and like the WD Black SSDs, the Blue doesn’t support secure erase with the popular Parted Magic tool, though we could secure erase the drive using the option in the motherboard firmware. It also doesn’t come with hardware encryption support, but it supports the basics, like SMART data reporting and TRIM.

While the Blue SN500 lacks any included accessories, it does come with support for WD’s SSD Toolbox. The utility enables you to monitor your drive easily and even view its real-time performance while you use it. You can also use it to update the firmware.

As a WD product, you also get free access to a cut-down version of Acronis True Image HD to clone over your data to the SN500 and create system backups. A few of the advanced features are removed, however.

The Blue SN500 comes in the popular M.2 2280 form factor and is single-sided, meaning all components are on one side of the PCB. The size of the PCB is overkill for the small components but assures compatibility with more systems.

While we're used to seeing multiple NAND packages, a controller, and one or two DRAM packages, the Blue SN500 has a single controller and a single 256GB SanDisk-branded 64L 3D TLC NAND package. After formatting, you'll have 232GB of usable storage space. The rest of the capacity is used for NAND management.

The controller is quite small, too, at least compared to most NVMe controllers. This one is a custom in-house designed NVMe controller that supports the NVMe 1.3 spec and communicates with the host over a PCIe 3.0 x2 link.