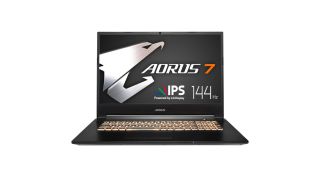 There's no such thing as a truly cheap gaming laptop. But this Gigabyte Aorus 7 Laptop certainly delivers some seriously good value. This 17 inch model features a sleek chassis, packing an impressive Intel mobile CPU, an Nvidia GTX 1660 Ti GPU and a 144Hz IPS panel, all for just under £1,300.

Specifically here, we're talking about Intel's Core i7-9750H, which is a powerful six-core, 12 thread, processor paired with one of Nvidia's GeForce GTX 1660 Ti GPUs complete with 6GB of VRAM.  Granted, the 1660 Ti isn't Nvidia's most powerful GPU, but it is a good match for the 1080p native resolution of the Gigabyte Aorus's 17-inch LCD panel.

Speaking of which, it isn't just any old 17-inch screen embedded in the Gigabyte Aorus 7, but an IPS item running at a 144Hz refresh rate for super slick gaming. What's more, the panel is supplied by LG, who make pretty much the best IPS panels on the planet right now, at least according to this journalist.

To sweeten the deal, Gigabyte includes not only a speedy 512GB Intel 760p PCIe SSD, but also 1TB of mass storage in a conventional HDD as well. You also get an RGB keyboard. Oh, and 16GB of 2,666MHz  Samsung DDR4 system memory too.

As for the battery, it's a 48.96Wh item, so don't expect miracles when it comes to up-time away from mains power. But you should get a couple of movies out of it on the plane. Finally, as for connectivity, you get a pair of USB 3.1 ports, a USB C port with DisplayPort 1.3 support, a mini DisplayPort 1.2 socket, along with HDMI 2.0 and Gigabit ethernet as well. In other words, it's got your connectivity bases covered.

It's still quite the pricey unit, however it's a fantastic value solution, you'll struggle to find a similar spec for anything less than £1,600 from Gigabyte's competitors. Still not for you? Well you can check out some more of our favourite gaming laptops here.