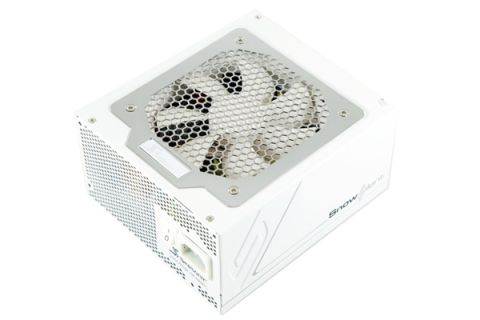 The Snow Silent 750 is a high-quality PSU in the medium-capacity category. In addition to its good performance and silent operation, it has a unique look thanks to its white chassis and nicely designed fan frame. It was wise to add a lower-capacity Snow Silent model; many users don't need 1kW or more for their systems. Even 750W can drive a powerful gaming system with two high-end graphics cards installed. Before the introduction of the Snow Silent series, Seasonic didn't have a medium- or high-capacity PSU able to meet the competition in terms of silent operation, mostly due to the 120mm fan that it liked to use. Smaller-diameter fans can produce a more focused airflow than larger ones. However, they have to spin at increased speeds in order to provide enough airflow, and this inevitably leads to higher noise output.

In the Snow Silent units, Seasonic offered a much more relaxed fan profile, along with a longer passive mode that kept the cooler silent in typical load scenarios. So, with normal ambient temperatures, the Snow Silent units can offer low overall noise levels. Nonetheless, if you stress this PSU with high loads in a hot environment, the fan will spin at full speed, outputting high noise levels. If you need a silent 750W unit, even under worst-case scenarios, the Snow Silent 750 probably won't do the trick. With that said, though, you won't easily find a PSU that offers super-quiet operation under full load at ambient temperatures higher than 40 °C (104 °F).

The Snow Silent 750 targets users who don't have a problem investing in a quality, high-performing, reliable PSU, since this one is backed by a seven-year warranty and uses only quality components. Seasonic combined a nicely designed chassis with its top-notch platform, and the result easily meets the top competition in this popular capacity category. Seasonic's engineers pushed the analog circuits to their limits, offering superb load regulation on all rails, along with high efficiency and good ripple suppression.

All of these traits, combined with silent operation, will satisfy most users. The only possible downsides might be the high price and the black modular cables, which, ideally, would be white. We expect Seasonic to further expand the Snow Silent line with more units offering a variety of capacities to users who want silent, high-performing PSUs. In addition, we are eager to test Seasonic's Titanium-rated platform, and to see the company enter the digitally-controlled PSU market.

Prev Page Performance, Performance Per Dollar And Noise Ratings
20 Comments Comment from the forums
Be In the Know