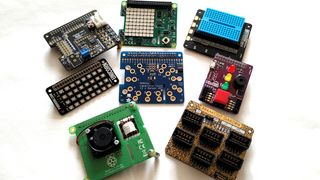 The Raspberry Pi is an awesome platform for learning and experimentation. We can learn to code, build robots, monitor satellites in orbit and so much more. But to make the most of the Pi, it helps to have the right HAT (hardware attached on top). HATs are expansion boards that connect to the Raspberry Pi’s set of 40 GPIO pins and add functionality such as lights, motors, sensors and fans.

There are hundreds, if not thousands of Raspberry Pi HATs on the market and most of them will work with any model of Pi that has 40 pins, which is every model from the 1A+ and 1B+ launched in 2014, though you’ll need to attach the pins to the Pi Zero.

To help you choose, we’ve listed the best Raspberry Pi HATs below, based on use case. These expansion boards can be used for everything from general learning to building arcade cabinets or implementing A.I.

When buying a Raspberry Pi HAT, ask yourself these questions:

For general purpose experiments in electronics, the Explorer HAT Pro is all that you need. Four capacitive touch pads and four crocodile clip pads offer touch and capacitive input which can turn conductive objects, such as fruit and aluminium foil into fun inputs.

Buffered 5v tolerant inputs and outputs and provide easy use of common electronic components you would normally need an Arduino board for.  Perhaps most importantly, it has four built-in analog inputs so you can attach analog devices such as potentiometers and joysticks without the need for an additional analog-to-digital converter chip (something the Pi lacks on its own).

Two built in motor controllers mean we can build a robot using this board. To top it all off there is a built in breadboard on which we can build our experiments. We do lose access to all of the GPIO pins when using the Explorer HAT Pro , but considering that this board provides so many different inputs / outputs and is designed with beginners in mind, we can forgive this loss.

A fun board that can be used to generate colour light shows and teach the core coding concept, the Pimoroni Unicorn pHAT is no bigger than a Raspberry Pi Zero, but contains 32 controllable multi color LEDs! This diminuitive Raspberry Pi HAT is covers  all of the GPIO pins but it only uses three of them , so clever hacks can be used to add this into a project. Each LED can be individually controlled, the brightness and color can be changed using an intuitive Python 3 library. Just be careful when staring (or use a diffuser) because these lights get really bright.

If you want to build a retro arcade machine, complete with an arcade joystick and buttons, the Pimoroni Picade X HAT is the board to get. The X HAT has all the connectors you need to attach one joystick, and up to 12 buttons, including those for functions such as adding a coin or 1UP button.

The added “Hack Header” provides a connection to the I2C interface, handy for adding extra components. Picade X HAT also provides sound using an I2S interface via the GPIO and a 3W mono amplifier outputs the audio to an external speaker (sold separately). The Picade X HAT has a USB port that it uses to provide power both to the Pi itself and to any speakers.

The latest version of the Picade X HAT uses a Type-C connector, which means that it provides enough juice to power either a Raspberry Pi 4 or an earlier model. Older versions of the X HAT, which may still be on sale, use a microUSB connector that only has enough juice for a Pi 3 or earlier.

After you install a one-line script, the Picade X HAT works flawlessly in popular emulation platforms such as RetroPie and Lakka, both of which see it as a keyboard where you just assign each button to a function (like you’d assign a keyboard key).

One potential issue with the Picade X HAT is that, because gaming puts a load on your processor and the board covers your CPU, it can trap in heat, which is a particular problem for Raspberry Pi 4s. If you use a stacker to raise the height, you can put a fan or heat sink below it.

The best all-around Raspberry Pi HAT for learning, the Sense HAT  Features onboard temperature, humidity, air pressure, accelerometer, gyroscope and magnetometer sensors can be used in science experiments via Python and Scratch. A joystick and 8 x 8 LED matrix can be used to make and control simple games.

If you’re working with kids or just want to have fun getting started with a Pi, the Sense HAT should be at the top of your shopping list. The amount of learning offered by this board is superb. A copy of this HAT lives about the International Space Station and every year students compete to have their code run on it . . . from the AstroPi, a Raspberry Pi in space.

The I2C interface is hidden as part of the Raspberry Pi GPIO. It is an alternative configuration of the standard GPIO and it offers advanced users a four wire interface for multiple devices, connected in a chain. Breakout Garden is a Raspberry Pi HAT which offers a simple means to connect I2C devices.

Additional breakout boards, ranging from LED matrices to air quality sensors and thermal cameras  slot into one of the six slots and can be easily used thanks to a custom Python 3 library. This is a highly configurable and simple to use base for citizen science projects.

The Raspberry Pi PoE (Power over Ethernet) HAT is compatible only with the 3B+ and 4 and provides a single wire solution for network and powering your project. This Raspberry Pi HAT is extremely useful for installing projects in remote locations, such as in your garden or shopping mall.

Using this HAT also provides us with a cooling fan, useful for the Raspberry Pi in general as it keeps the temperature down, but more so since the release of the Raspberry Pi 4.  The PoE HAT fits atop all of the GPIO pins, but an included extension header means that we can connect another board on topsure that there is clearance for the fan.

If you have ever wanted to learn Artificial Intelligence or build your own voice assistant, such as Siri, Alexa or Google, then Google’s Aiy Voice Kit is for you. The Voice Kit comes in a simple card box, but inside there is a Raspberry Pi HAT which has connections for the speaker, button, microphone and servos.

To accompany this Raspberry Pi HAT is a robust Python 3 module which simplifies the task of creating a voice assistant. This HAT can be used with all 40 pin models of Raspberry Pi including the Pi Zero W. A great kit to start your AI learning!

Pibrella is the ideal way to introduce electronics and programming to young minds. Designed for the original Raspberry Pi, but compatible with all models of Pi, Pibrella provides us with a simple push button, three LEDs and a buzzer. Four inputs, and four outputs can be used with external components, including motors.

To program Pibrella we can use Python or Scratch and quickly bring a project to life. This Rasbperry Pi HAT can be used to build simple robotic projects and teach logic, core concepts using the LEDs. The ideal board for kids who just want to build their first project.

Best for Creating Your Own Raspberry Pi HATs

If you are a seasoned Raspberry Pi hacker, then you may have already taken your first steps into electronics using a breadboard. But where do you go from here? The answer is to create your own circuit board.

The Adafruit Perma-Proto HAT works with 40 pin GPIO Pi and provides a place where you can solder your own components to build a circuit. LEDs, buttons, motor drivers and more. This is a great way to take your skills to the next level and learn how to layout a circuit.

Did you know that a banana can be an instrument? A watermelon can be a controller for a game? This and lots more is made possible using the Adafruit Capacitive Touch HAT. For use with all 40pin GPIO Pi, this HAT has 12 crocodile clip connectors which can be connected to objects that are conductive.

When a conductive object is touched, the Adafruit Capacitive Touch HAT detects a change in voltage and this triggers an action in your Python code. The classic project for this Raspberry Pi HAT is the Banana Piano which sees each banana representing a key. Touch the banana and the note for that key is played. The Python code is a little tricky to get right, but the fun with this board is limitless.