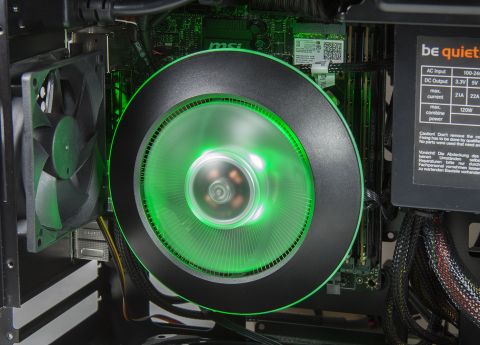 What started out as a promising $40 CPU cooler with RGB lighting and an interesting design turned into an oversized nightmare that failed at its one and only job, keeping your CPU cool.

At first glance, our initial test of Cooler Master’s MasterAir G100M revealed a good-looking CPU cooler that just couldn’t take the heat. However, our readers quickly pointed out that while the G100M is rated at 130W, the CPU in our overclocked, full-size testing rig was rated at 140W at stock settings. With that in mind, we decided to retest the MasterAir G100M on our 84W-rated Mini-ITX testing rig to see if it could earn some redemption. Unfortunately, further testing only revealed more problems.

First, a quick recap. The Cooler Master MasterAir G100M is a compact, downdraft style CPU cooler whose form bears some resemblance to that of a classic flying saucer UFO. Its design features a solid copper base that conducts heat from the CPU up into a copper vapor chamber that in turn dumps heat into an array of fins surrounding the core. Then, the cooler's 90mm fan removes the heat. Said fan features built-in RGB LED lighting that accepts control via both motherboard software and an included controller. The G100M has a thermal design limit of 130W and supports all major CPU sockets, including Intel 775, 115x, 1366 and 2011x as well as AMD FM1, FM2(+), AM2(+), AM3(+) and AM4.

In our original review we discovered that the G100M’s not-so-compact size caused it to encroach on the motherboard’s RAM slots, limiting users to the use of low profile memory. This is a common issue among CPU coolers, and while it can be a bit of an annoyance to builders, especially those who are building a PC for the first time, it’s rare that we find a cooler that completely blocks the installation of system components. However, that isn’t the case here as the G100M was large enough to completely block access to the PCIe slot on our testing motherboard.

It’s worth noting that the placement of the CPU socket (in relation to the PCIe slot) matters here and that other boards from other manufacturers may not have this issue. That said, since we don’t use the GPU in our CPU cooler tests and it doesn’t significantly contribute to the overall results, we’re going to press on with retesting the G100M to see how well it can handle a mid-tier CPU.

We retained the hardware configuration from past compact cooler reviews while comparing the MasterAir G100M to its compact downdraft-style rivals, the Reijintek Pallas, RC-1001 Brontes, Shadow Rock LP and NH-12.

As always, we maintained the ambient temperature of the test at 26°C (78.8°F) and recorded the noise levels 0.25m from the case’s front corner on the side that opens. Next, we corrected them to the 1m industry standard by subtracting 12 decibels.

Now that we’ve moved the MasterAir G100M into our 84W Core i5-4690 testing rig, you’d think it might be able to keep things cool long enough to complete the test, right? Well guess again. Despite its 130W power dissipation rating, the G100M performed so poorly that the testing CPU reached its 100C thermal limit and throttled down to 3.1GHz in less than a minute.

In an effort to ensure that we didn’t make any mistakes during the installation, we uninstalled, reinstalled and retested the cooler two additional times. We even re-applied thermal paste and doublechecked all of the mounting hardware. Still, the results remained the same.

With a maximum speed of 2200 RPM, faster than most of the coolers in the comparison, the G100M should at least be able to keep the test CPU under 100°C. Unfortunately, that wasn't the case with the samples we received.

Unsurprisingly, the G100M’s small 90mm fan and high fan speed made it the loudest cooler, if only by a bit, in our comparison.

A combination of sky-high temperatures and almost-as-high fans speeds put the G100M at a large disadvantage in our efficiency benchmark.

Even with its $40 price tag, overall inferior performance ultimately landed the MasterAir G100M in last place in our performance-per-dollar value benchmark. Interestingly enough, the highly regarded Noctua NH-L12 found itself in nearly last place due to its higher $60 price tag, despite its outstanding performance.

With a cool design, RGB lighting and low, $40 cost, the MasterAir G100M started out as a promising CPU cooler with the potential to be one of the best compact coolers we’ve tested in a long time. Instead, what we found was an oversized, UFO-shaped disaster that seemed incapable of doing its one and only job, keeping your CPU cool.

That said, builders seeking a compact CPU cooler that performs as well as it looks should consider something along the lines of be quiet!s’ Shadow Rock LP. And if you require something even more compact, we recommend the Reeven Brontes.