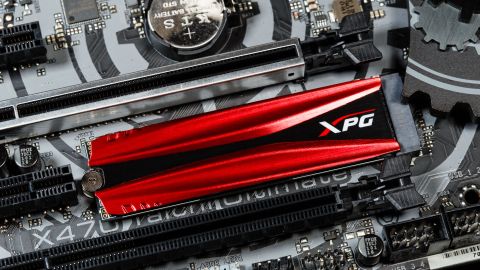 Today, we pit the Adata XPG Gammix S11 Pro against a bunch of competing high-end drives. This includes its near-identical twins, the Adata XPG SX8200 Pro and Mushkin Pilot-E, the Samsung 970 EVO Plus and 970 PRO, WD Black SN750, as well as the more affordable Corsair Force MP510 and Intel SSD 660p. On top of this, we added in the super expensive Intel Optane SSD 905p in addition to some more budget-sensible options such as Crucial’s SATA-based https://www.tomshardware.com/reviews/intel-optane-ssd-905p,5600.html and a WD Black HDD for good measure.

For those who prioritize fast game load times, the S11 Pro achieved a very fast time on this test. Intel’s Optane 905p takes first place and the Samsung 970 Pro took second, but the Adata S11 Pro’s fastest total load time of 18.55 seconds, outperformed the SX8200 Pro by a fraction of a second and got it third place overall.

In contrast to its game loading results, Adata’s S11 Pro copied the 50GB test folder at a rate of about 100 MBps slower than the SX8200 Pro. But the Mushkin Pilot drive trails by another 27 MBps. This ranks the S11 Pro sixth overall in copy performance.

Large file read performance is also slower. Instead of reading at about 2.2 GBps like the SX8200 Pro or 2 GBps like the Pilot-E, the S11 Pro read the 6.5GB test file at 1.9GB/s. This ranks it eighth overall, though it still outperforms the Intel SSD 660p, MX500, and the WD Black HDD significantly.

It seems that the SX8200 Pro has some faster-performing firmware than that of the S11 Pro. But overall, the S11 Pro is still a high-ranking drive. The S11 Pro scored sixth place and ties the Corsair Force MP510. It outperformed the Pilot-E and WD Black SN750 this time, is almost three times faster than the MX500, and absolutely destroys the HDD’s performance.

Like PCMark, SYSmark uses real applications to measure system performance. SYSmark takes things much further, however. It utilizes fourteen different applications to run real workloads with real data sets to measure how overall system performance impacts the user experience. BAPCo's SYSmark 2014 SE installs a full suite of applications for its tests, which include Microsoft Office, Google Chrome, Corel WinZip, several Adobe software applications, and GIMP. That also makes it a great test to measure the amount of time it takes to install widely-used programs after you install a fresh operating system.

SYSmark reiterates what we have been seeing. The S11 Pro scores up there with the best, but the SX8200 Pro edges away ever so slightly with higher highs. The S11 Pro comes in fifth place overall, just points behind the Samsungs and ahead of the Pilot-E and WD Black SN750. And, compared to a standard HDD, it isn’t even a fair fight. You’re at a significant disadvantage with an HDD running your OS and applications.

While testing with light workloads revolving around consumer-based use, the S11 Pro usually fell behind the SX8200 Pro ever so slightly. However, in SPECworkstation 3, we can see the opposite occurs. The S11 Pro lands fourth place here, just behind the Samsung 970s and far ahead of the Mushkin Pilot-E. It seems the S11 Pro can better withstand prosumer workloads and delivers more consistent performance.

In ATTO the S11 Pro’s read performance was within a few MBps of the SX8200 Pro, and writes were a bit slower. Overall, the Adata S11 Pro hit about 3.4/2.9 GBps read/write speeds.

The S11 Pro was able to do a little better in testing with iometer. Read performance peaked at 3.5 GBps, while write remained about the same at 2.9 GBps. At QD1, the S11 Pro shows off some of the fastest response times in the whole group, save for the Intel Optane 905p. Even averaging QD1-4, this drive proves to be one of the fastest consumer SSDs available. And, at a high QD of 128, random performance maxes out at about 365,000 / 412,000 read/write IOPS.

The S11 Pro’s power consumption is a bit more restrained than the SX8200 Pro. This could be the reasoning behind its slightly slower file copy results. Nevertheless, the S11 Pro, consumed a similar amount of power on average as Mushkin’s Pilot-E. With an average of 220 MBps per watt consumed, it lands second place on the efficiency chart here, closely on the heels of WD’s Black SN750. Sipping just 12mW of power at idle with ASPM enabled, it is rather efficient when idling, too.