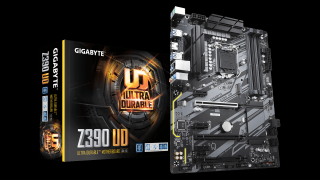 Everyone who’s moving seems to be moving towards Ryzen, but Amazon has a Black Friday Deal for those still on the Core cruise: Gigabyte’s Z390 UD is now available for $20 below its regular price.

We wouldn’t count on a board this cheap to deliver a satisfying CPU overclocking experience, and the Z390 UD doesn’t even support SLI, yet one Z390 advantage remains: Users can plug in just about any LGA 1151 processor and run mainstream DDR4-3200 performance memory kits such as this $58 16GB kit from Corsair or this $100 32GB kit from OLOy.

Onboard features are sparse, though the Z390 UD does have an onboard PCIe x4 M.2 connector and an RGB cable header. But if you’re simply looking for any easy path to get out from under the DDR4-2666 limit of Intel’s lower-model chipsets, this could be your lucky break.