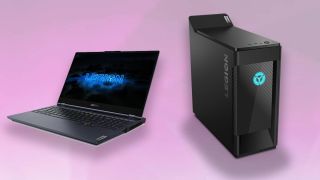 Following a smattering of details when Intel and Nvidia launched new components, Lenovo is now releasing more information about its revamped Legion gaming lineup, including three new laptops and a redesigned desktop. The company is also diversifying this year by adding AMD’s Ryzen processors to some of the designs. The new lineup is set to launch in May.

The laptops follow a new naming scheme. There’s the Lenovo Legion 7, Legion 5 and Legion 5i, as well as a new IdeaPad-branded gaming laptop. On the desktop side, there’s the Legion Tower 5i.

Across the Legion laptop lineup, Lenovo is touting its new TrueStrike keyboard with a softer landing and more tactile feel, 1.5 mm of travel and anti-ghosting. Lenovo suggested it may be more like what one expects from its ThinkPad line. Additionally, they’re getting slim bezels and the webcam is being moved above the display with a built-in privacy shutter. They’re also getting vapor chamber cooling and a variety of FHD panel options.

On the low-end, Lenovo is introducing a new IdeaPad-branded laptop, the IdeaPad Gaming 3. This doesn’t have the same TrueStrike keyboard, but Lenovo is promising 1.5mm of key travel with larger arrow keys and dedicated media controls. It will go up to Intel’s Core i7 H-series and top out with Nvidia GeForce GTX graphics.

The Tower 5i will include up to an RTX 2070 Super, either a 450W or 600W power supply, and optional ARGB lighting and RGB liquid cooling. The transparent side panel has been made larger and the carry handle has been moved to the back of the device. There are still ports towards the top of the 28-liter case. Lenovo says the case won’t require tools to open.

We’re hoping to see many of these models cross in our labs in the coming months, including the desktop with new Intel processors. And hopefully we’ll see how Ryzen and Intel perform in similar designs, as well.